Behind Closed Doors: The Tragic Untold Story of the Duchess of Windsor


I became aware of Wallis Simpson, the Duchess of Windsor, at a young age.
I was eight years-old when the landmark Thames Television series Edward and Mrs. Simpson screened, and younger people would probably have no idea how much scandal and discussion it caused. Especially so in rural North Queensland, a royalist enclave where the whole issue was still hotly debated and keenly felt. My grandmother was unusually sympathetic toward Mrs. Simpson, and so I inherited this same fondness.
In Hugo Vickers’ Behind Closed Doors he mentions the screening of that series, and whether or not the Duchess of Windsor actually watched it. He also tells a great deal of other information about the Duchess’ private life, providing the reader with an exhaustive account of the sad final years of Mrs.Simpson, the American woman who brought down the King of England. 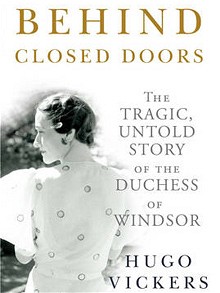 Now, reading books about Wallis Simpson is something of a hobby of mine. I think the best by far is Diana Mosley’s The Duchess ofWindsor. Mosley, a Mitford sister, was, of course, a close personal friend of the Duchess, and painted a deeply sympathetic picture of her life. Indeed, Mosley was a very fine writer whose talent was overlooked, in part because of her much more acclaimed sisters Nancy and Jessica and in part because of the scandal and unfortunate political associations that dogged her own life.
The second definitive book on the Duchess’ life is her own memoir, The Heart Has its Reasons – surely one of the most beautiful and evocative titles ever. Vickers mentions both books in his own, but he is somewhat dismissive of them, claiming that they are whitewashes that seek to cast the Duchess in a much more compassionate light than she had ever been before.
That’s not to say that this book, Behind Closed Doors, is a hatchet job on Wallis Simpson. Far from it. Vickers, a vintage royal-watcher who was himself a part of the Windsor’s story, tries to cast an objective eye across the great events of the Duchess of Windsor’s life. But he is so infuriated, and distraught, by the horror of the poor woman’s twilight years that he can’t help but render her a slightly pathetic creature, an ambitious, uncultured woman who was visited with all of the worst horrors of old age. In this book Vickers paints the terrible helplessness of the elderly and frail Duchess, surrounded by venal French executors, lawyers and hangers-on who steal from her and keep her locked in her room, more or less a vegetable.
The villain of the piece is Maitre Blum, the Duchess’ French lawyer. A monster of self-importance, she spent decades both defending the Duchess’ name and slowly embezzling the Windsor’s estate, taking control of family papers and dispensing jewels, furniture and antiques to friends and institutions, all the while spinning wild conspiracy theories about how the British royal family were seeking to destroy the Duchess, steal her belongings and defile her good name. Vickers creates a brilliant character with the publicity-hungry Blum, who eventually, in some kind of karmic retribution, finds herself elderly and frail and a prisoner in her own apartment. She becomes blind, and finds her way around by following a rope which has been strung up through the rooms of her home.
Blum sought to aggrandize herself, and, bizarrely, to re-establish the Duchess’ reputation, by giving away the Windsor’s family heirlooms to various French charities and institutions. Eventually the Duchess of Windsor was completely unconscious to it all, barely alive for a miserable decade in the care of fiercely protective nurses.
This is not a feel-good book. The ultimate feeling I got from reading it was that the Duchess lead a wasted life, and that she was pretty much completely unhappy from the day of her marriage to Edward till the day of her death, fifty years later. There is a great deal of delightful, gossipy detail in the book, and Vickers is never better than when describing fashion and interiors, two areas in which the Duchess herself excelled.
This is a must-read for any fans of the British Royal Family.
Email Post
Labels: biographies British history Diana Mosley duchess of windsor royalty windsors