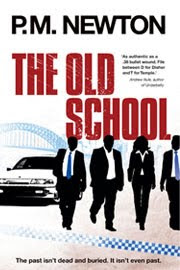 The Old School is a dazzlingly original work, equal parts gritty crime fiction, social history and political commentary, and P. M. Newton's voice is a welcome new one on the Australian literary scene. So much of the novel intrigued me and left me full of admiration for the author's daring, her willingness to engage with complex issues and the sheer quirkiness of the book's combined emphases. The Old School is a book that should be read with a careful eye to detail, and Newton's future fiction is to be anticipated with relish.
One of the first things that really struck me about the book is its setting in South Western Sydney. Now, I am a resident of that benighted stretch of Australian urban discontent, and I am famous for claiming that most of Sydney's real stories are happening here. I am delighted that Newton (an ex-police officer who spent many years pounding the footpaths of Bankstown and Cabramatta) has seen the potential of the area - the rich culture, the insane clashes of ethnicity, cuisine, language and energy, the sometimes harrowing histories of its residents. The Old School is that rare thing, a Sydney novel. And it is a Sydney, moreover, that would be recognisable to the majority of its residents. It's a daring engagement, and one that few authors would bother with. Bravo P. M. Newton!
I was also intrigued by the book's discussion of race. The protaganist is a Eurasian detective called Ned Kelly, and she drifts through a world populated by (and engaged with) Aboriginal activists, old-school Anglo coppers and a host of other Australians of myriad ethnicity. In fact, I would suggest that the question of race is central to the novel, and central to its understanding. It is a discussion about new and old, belonging and arrival - the kinds of themes that are political minefields, but all the more exciting for their presence.
Most of all I loved the living, breathing comlexity of Ned, the heroine. Hers is a life lived in pretty regular conflict with her job, with her past, and with her uncomfortable present. Expected to be a hard-nosed copper, Ned in reality reels from violence and, ultimately, death. She is no CSI ice-queen:

"The more she knew about the dead, the more real they became, and the less she wanted to deal with their remains. Touching, kissing - she couldn't imagine caring so deeply about another human being that it could transcend the rank aspect of death."

There are moments of description and reflection like this throughout the book, giving me constant pause to remark on the reality of the situations, and the beauty of their expression.
Ned's own contradictions are perfectly captured, and she displays the bewildering range of hypocrisies, sanctimonies and double standards that we all make ourselves live with. Heightened by her feelings of both belonging and exclusion due to her mixed-race background, Ned is at turns censor and censored:

"He read her too easily, caught her stereotyping. She resented stereotyping, hated it when it happened to her, but she did it too, like most of the coppers she knew. There were degrees...when shit came to shove most of them reverted to instinct. Instinct was cruel but it worked just often enough to make it useful."

"Crime novel" simply doesn't work in describing The Old School (though I don't see anything wrong in that particular appellation). Ultimately it is something more, and something more unsettling. It is an experiment in genre fiction and cultural history, and it is challenging, engaging and constantly intriguing.
Email Post
Labels: crime favourites fiction race reviews South West Sydney

P.M.Newton said…
Thank you, Walter. While it's always nice to get a positive review (heaps better than the alternative!) it's an absolute joy to get a review from a reader who has so clearly "got it".

Any writer will tell you that the book in your head and the book that you manage to get out on paper are often not the same book. Reading your review was a thrill, it was "proof" that the heart of the book had made it out of my skull, onto the pages and into the consciousness of another.

Walter Mason said…
Bookbird - it is a fascinating book, and a really engaging exploration of so many themes - have a look at it.
8 February 2011 at 08:53