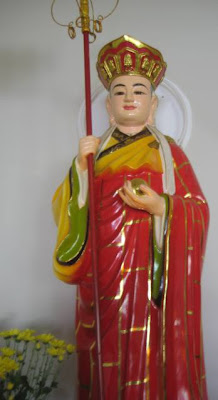 Minh Giac Temple is what I call my local temple.
It is an unassuming brick veneer cottage on the outskirts of Cabramatta, and it had the great good fortune of possessing an enormous garage. This has been turned into the main hall, and it is here where prayers, Dharma talks and other celebrations are held.
The Abbott there is the Ven. Thich Hanh Hieu, and he is a dear friend of mine, though he is inclined to scold me for not attending prayers and for gaining weight. There is a younger monk in residence, too, who came over from Vietnam a few years ago.
I love the way that Minh Giac has adapted its run-of-the-mill suburban space and turned it into something quite different. The backyard barbecue, for example, has been modified and turned into a shrine to the Dharma guardians. 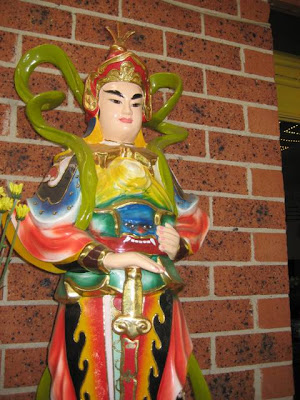 Quite often I am attracted to the disorder of Buddhist temples. People imagine them - fantasise about them - being zen-like spaces of quiet calm and minimalism. But normally the opposite is the case. They seem to attract junk, and there is usually a room (or 3) that has been abandoned to the collection of unused religious paraphernalia that nobody knows what to do with. 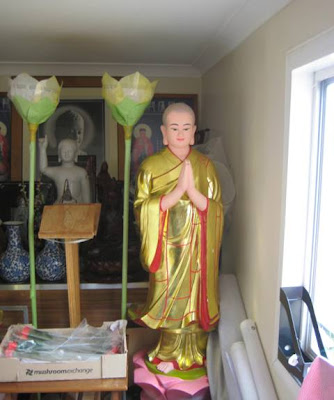 I love poking around in these little rooms and seeing just what statues and ideas have fallen out of favour recently.
Not only are monks irrepressible collectors of religious trinkets, but also lay-people are inclined to dump at the local temple that statue they just don't know what to do with. This leaves images all over the place, dusty and forgotten on high shelves or pushed to the back of a bookcase. 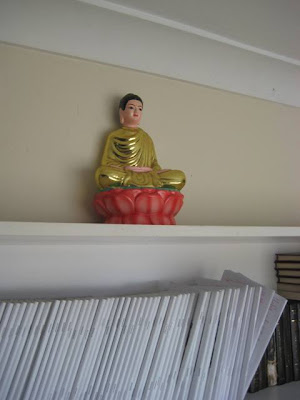 Most temples, too, have a statue of the baby Sakyamuni, and I have noticed that Minh Giac has recently acquired a large white one - the only one I know of in Sydney. 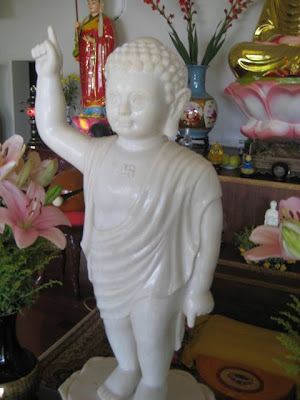 It sits right at the front of the shrine, awaiting its day of glory during the season of Vesak, the celebration of the Buddha's birthday.