One of the biggest Buddhist temples in the Sydney area is Phuoc Hue, out in the industrial wasteland of Wetherill Park.
Phuoc Hue is certainly Australia's biggest Vietnamese Buddhist congregation, and it is THE place to go to on Lunar New Year's Eve, where the crowds are incredible, and they even have a fireworks display.
Though I've never been to Phuoc Hue for a worship service, I occasionally go there to make a prayer to Kwan Yin. They have a wonderful grotto behind the big statue of Quan Am outside, a quite hidden little mystical cave filled with statues of the Goddess of Mercy and all kinds of other treasures. 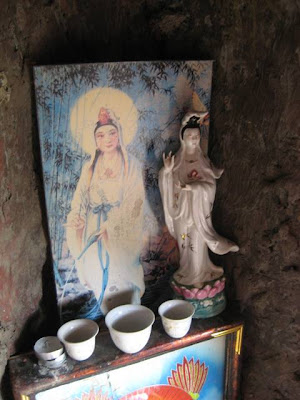 There is a big and beautiful statue of the fat Di Lac Phat with children clambering all over him.

In fact, the statuary is really quite over the top in general, and the dragons that climb up the staircase leading to the main hall are an enormous riot of colour and movement.

One of my favourite spots is the spacious shrine to the ancestors which, in the usual fashion of Vietnamese temples, is situated directly behind the main prayer hall. It is airy and light, and has an enormous and quite beautiful painting of Bodhidharma, the first Patriarch of Zen Buddhism. 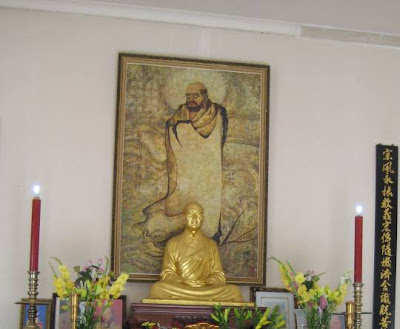 Read about Giac Vien Pagoda in Ho Chi Minh City, Vietnam
Why I have a special interest in the Bodhisattva of Compassion
Tin Hau is a Chinese folk Goddess often mistaken for Kwan Yin