I have a special interest in Kwan Yin, the Buddhist Goddess of Mercy.


Ever since I first travelled to Vietnam I have been fascinated by her form and her legends.

Though she is the pre-eminent figure of popular devotion in East Asian Buddhism, very little has been written about her in the West, and I think I have probably read every single word ever printed in English about the Goddess of Mercy.


By far my favourite book on the subject is John Blofeld's exqisitely old-fashioned Bodhisattva of Compassion. It is the kind of book that probably wouldn't be published now, so peculiar is its construction and content. It is equal parrts spiritual memoir, travelogue, manual of religious practice and collection of folklore. Blofeld was perhaps the greatest of the sinophile writers, and was particularly interested in the religions of China. Toward the end of his life he began to affect the appearance and lifestyle of an old-style religious hermit, and a friend of mine who met him just before his death said that this old Englishman looked exactly like a Chinese person. He had for so long been immersed in the culture he loved and wrote about that he had morphed his own face and body into its physical forms.

Bodhisattva of Compassion is a charming book, a belletristic collection of anecdote and personal reflection that would be of great interest to anyone who wanted to know more about Buddhism, especially in its Chinese forms. And for anyone interested in learning more about the idea of "The Goddess," Bodhisattva of Compassion represents one of the earliest, and most poetic, explorations of that subject.

Blofeld's voice is wonderfully Edwardian, and many of his stories read like they came from the pages of Wodehouse or one of the Bensons. And indeed, this propensity toward sinophilia was a great trend in the Edwardian age, and later. One of my favourite authors, Harold Acton, was another great sinophile in the tradition of the gentleman scholar. 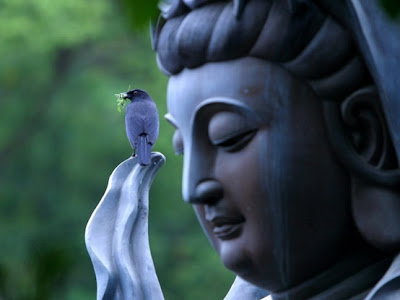 In spite of this ease of reading, and the author's seemingly light touch, the book contains a great deal of really fascinating information that is of great value to the Buddhist scholar. He thoroughly explores the different traditions and forms of Avalokitesvara. We mustn't forget that Blofeld was extremely fluent in Chinese, and had spent a lifetime collecting stories and miracle tales grounded in the Chinese Buddhist tradition.
They have recently produced a new edition of Bodhisattva of Compassion, and I am delighted that such a book still strikes a chord with modern audiences. After just a few pages you too will be drawn into Blofeld's gentle stories of Kwan Yin, the beloved Goddess of Mercy.
Email Post
Labels: bodhisattva buddhism china John Blofeld Kwan Yin new age

Deacon Down Under said…
I truly love this book and Jon Blofeld brings Chinese Buddhism and devotion to Kuan Yin profoundly to life. I had a sense of that world in the Buddha's Tooth temple in Singapore recently, with black robed lay devotees and monks chanting Kuan Yin's mantra
6 December 2012 at 23:39

Walter Mason said…
Hello David - so nice to meet another fan! Blofeld was such an interesting figure, and a very charming writer.
7 December 2012 at 17:22