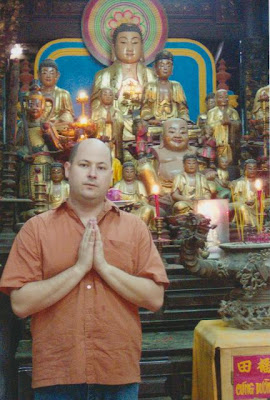 Here is a younger and slimmer me being particularly pious in front of the amazing Kwan Yin shrine at Giac Vien Pagoda, one of my favourite places in Ho Chi Minh City.
I first visited the Pagoda back in 1994, when getting there was quite terrifying. At that stage the surrounding area was a notorious slum, and one of the most dangerous parts of the city. Tattooed toughs glared at me as I rode past, and when I arrived at the temple I was accosted by drunks and beggars and scruffy chidren leaing monkeys wth string around their necks. It was scary.
When I was studying Vietnamese in 1999 I would visit the temple regularly, and became good friends with the Abbott and one of the monks there. The monk in question was an eccentric character - he wore hot-pink pyjamas, for a start. He was abslutely lovely, though, and kept me constantly on the prayer list.
The temple's fortunes have ebbed and flowed over the years. At one stage it was connected by a bridge to the neighbouring Dam Sen amusement park, and included as one of the park's attractions. These seemed to do it the world of good, and things picked up for a while. The park seemed to contribute to the temple's upkeep, and if you wanted to shell out the $10 or so entry fee (for foreigners) it provided a much safer and more comfortable way to access the temple grounds.
But for whatever reason the gate between the two properties was bricked up and the bridge was destroyed, and these days Giac Vien continues to crumble and moulder away. It is one of Ho Chi Minh City's oldest temples, and its collection of statues is really quite extraordinary, spanning just about every period of popular Buddhist art for the last 300 years. I can - and do- spend hours in there when I am in Vietnam.
The surrounding neighbourhood seems to have picked up somewhat in recent years - the road is now more or less paved, and the neighbourhood residents seem quite friendly really, and well disposed to visitors. There are still one or two beggars, and a couple of the monks seem to be rogues who will ask you directly for money.
It's a fair trip from the centre of Saigon, and you should put aside an entire morning or afternoon to get out there and see it properly.
Details: