I have blogged before about my passion for E. F. Benson's memoirs, and over at the Newtown Review of Books I write a more general essay about why I loveBenson so much. I always cite him as one of my foremost literary influences.

Suffering so often as I do with ghastly migraine, I am occasionally forced to escape into reading for pleasure - something I can't always do. My pleasure of choice is often Benson's final book, a gentle, funny and constantly fascinating memoir called, appropriately, Final Edition. 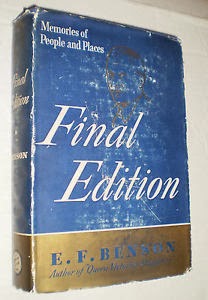 Though he was at death's door, Benson is at the height of his literary powers in this book, and his gift for storytelling is at its very best. I love when he describes a visit to Henry James, strangely enough living in the very house that Benson himself would eventually occupy and make famous in his Mapp and Lucia novels. His stories about James are hilarious (though, true to his gallant form, he claims that his brother, the famous Edwardian diarist A. C. Benson, wrote a much better account), and I was fascinated by them. James was old fashioned and self-consciously literary, and he could not bear disloyalty. Benson tells us he said: "I am singularly accessible to all demonstrations of regard." I recognised instantly the fragile writers’ ego, and the way non-writers (or just the terminally insensitive) think they can make some throwaway derogatory comment about one's writing and imagine one will take it in good spirit and forget it instantly. Anyone who tried it with James was met with a lifetime's shunning.

Benson's mother, Mary, was a great literary character all on her own, a short, plump lesbian who was married for 40 years to the Archbishop of Canterbury. Upon the Archbishop's death Queen Victoria, who revered him, offered Mary Benson a cottage on the grounds of Windsor Palace, but Mary refused, preferring the freedom and independence of her own digs, where she could more openly shack up with her girlfriend.

The recent book about Mary Benson, As Good As God, As Clever as the Devil by Rodney Bolt is well worth reading and makes a perfect companion volume to Final Edition.

His sister Margaret Benson was a noted Egyptologist, but in this book Benson recounts her sad final years when, a housebound manic depressive, she makes her mother's life a misery by seeking to control everyone around her. Benson charts the bittersweet relationship between she and his mother, and his pain is palpable.

Final Edition is a brilliant evocation of Edwardian life, of literary gossip, and is a fascinatingly intimate memoir of one of the strangest families ever to have existed in Britain. Do find a copy.