Writing the Personal: As We Were by E. F. Benson

One of my very favourite examples of personal writing is E. F. Benson's exquisite memoir As We Were. 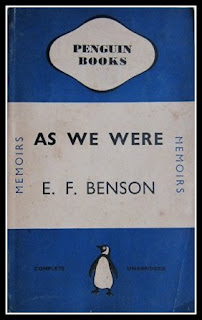 Many of you may not be familiar with E. F. Benson, though I am obsessed with him and he is, I think, an enormous influence on my own style. I first discovered him while reading about Nancy Mitford who, along with luminaries such as Evelyn Waugh and Noel Coward, made a cult of Benson's books after he had died. By that time they had become unfashionable and gone out of print. The young writers took out ads in The Times saying "We will pay anything for Lucia books." Lucia was the heroine of Benson's most popular series of comic novels.

Benson is an intriguing figure. He was the son of Queen Victoria's Archbishop of Canterbury, but apart from that poor man the entire family was queer, including the Benson matriarch, who took up with her best friend as soon as the Archbishop died.


The entire family was literary, as well. Apart from E. F. (Edward), older brother Arthur was one of the Edwardian era's most popular diarists and younger brother R. H. was a notorious Catholic convert (later a Monsignor) whose religious writings were hugely popular with English Catholics and who, in his youth, had been a great pal of the wicked literary enigma Frederick Rolfe.


E. F. Benson was a prolific writer, and perhaps the Edwardian era's best comic novelist. He achieved fame early with a send-up of the modern woman called Dodo, but that book is almost unreadable now. Indeed, I find most of his fiction appallingly dated, apart from his masterpieces, the series of novels featuring the repulsive heroines Mapp and Lucia. These two women are amongst the greatest comic creations in English literature.


Less well known is E. F. Benson's autobiographical work. This, too, is very fine, and As We Were is perhaps the best example. Published in 1930, it details the vanished Victorian world of aristocrats and eccentric upper-class dilettantes, most of whom Benson knew personally and many of whom were family members.