The Bensons: A. C. Benson 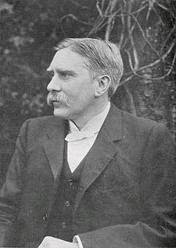 I am a great lover of the Edwardian writers, and perhaps above all I am devoted to the work of the Benson brothers, those characteristic Edwardians who combined talent and wit with equal amounts of repression and fear.
On Friday I was leafing through A. C. Benson's From A College Window, and came upon a passage which struck me with its simple wisdom and its quite profound common sense. I will give you the passage in full later.
A. C. Benson was the most bookish and intellectual of the Bensons. The paterfamilias of the clan was the mammoth Victorian religious celebrity, Edward White Benson, himself a schoolmaster and later Queen Victoria's favourite Archbishop of Canterbury. A. C. Benson felt particularly close to his father, acutely aware of his sensitivities and worries about his children, and was desperate to please this larger-than-life character. Like all his brothers, he was a lifelong bachelor (make of that statement what you will) and he spent his entire life as a mild and much-loved school master at Cambridge. He was devoted to the education of his charges, and throughout the year he kept an idiosyncratic diary describing his insanely quiet and unremarkable life. These diaries were then worked up into books of essays and reflections which became enormously popular, and A. C. Benson found himself one of the bestselling literary celebrities of the Edwardian era. His prose, his life and his humbly conservative attitudes seemed to capture the mood of the age almost perfectly, and each year his huge reading audience looked forward to a new book from the quiet don. No less a personage than the master novelist Henry James was a fan of A. C. Benson's work, seeing it as characteristically British, capturing perfectly a certain romantic attitude toward life, education and the passing of the seasons that could only ever be written in England. Perhaps unsurprisingly, A. C. Benson was a lifelong depressive, bitter about the homosexuality he could not deny and jealous of his more vivacious and attractive brothers.
What's most extraordinary is that, once he died (in 1925), A. C. Benson was almost instantly forgotten. His books quickly went out of print, and if he was remembered at all it was as a quaint remnant of a brief age of glory in English letters. His attitudes, his writing style and his way of life all became completely unfashionable, and by the 1950s it was as though A. C. Benson had never existed.
And what a shame!
It's my great dream to one day put together a collection of his best work, though there is surely not a publisher in the universe that would be willing to back me on the project. I fear that A. C. Benson's star will continue to diminish, eventually to be snuffed out altogether at some not-too-distant date.
Here is that beautiful passage in From A College Window. Benson was in his mid-50s when he wrote the piece, and perhaps it captures perfectly both the despair and comfort of middle age:

"I no longer have any particular desire for or expectation of being impressive. One likes, of course, to feel fresh and lively; but whereas in the old days I used to enter a circle with the intention of endeavouring to be felt, of giving pleasure and interest, I now go in the humble hope of receiving either. The result is that, having got rid to a great extent of this pompous and self-regarding attitude of mind, I not only find myself more at ease, but I find other people infinitely more interesting. Instead of laying one's frigate alongside of another craft with the intention of conducting a boarding expedition, one pays a genial visit by means of the long-boat with all the circumstance of courtesy and amiability. Instead of desiring to make conquests, I am glad enough to be tolerated. I dare, too, to say what I think, not alert for any symptoms of contradiction, but fully aware that my own point of view is but one of many, and quite prepared to revise it. In the old days I desired to convince; I am now only too thankful to be convinced of error and ignorance. I now no longer shrink from saying that I know nothing of a subject; in old days I used to make a pretence of omniscience, and had to submit to being tamely unmasked. It seems to me that I must have been an unpleasant young man enough, but I humbly hope that I was not so disagreeable as might appear."

Wonderful. And so incredibly civilised.

Claire Corbett said…
That is a great quote from AC Benson, Walter and rings very true. Interesting post, thank you.
5 September 2011 at 17:53