It's no secret that I am a fan of Maximilism.

My home is filled with religious kitsch that could easily furnish several temples and a couple of churches. And that's across all sects and denominations. Once, when I took my brother-in-law to visit a Buddhist monk living in a small suburban cottage that had been turned into a temple, he said, "This guy's a lightweight when it comes to statues. Your house looks more like a temple."

While some criticise me for filling my house with devotional tat, I like to think I am curating one of Australia's foremost collections of popular religious art. So you can imagine that one of my favourite programs on television was ABC's constantly fascinating The Collectors. Each week it showcased hoarders and accumulators after my own heart, people who collected irons and vintage handbags, plastic bangles and condiment packets. My pleasure in the series only escalated when they appointed the single most fabulous woman ever to appear on Australian television: the extraordinarily beautiful and stylish Claudia Chan Shaw.

Then my viewing became obsessive, and I was panting every week to see what the utterly chic Claudia would be wearing as she trawled through sheds full of penny farthings and attics hung thick with 70s wallpaper samples.

Imagine my pleasure when I discovered that Claudia has just published her own book, a fascinating overview of the world of collecting: who's doing it, what they're collecting and where they get it. Collectomania is not just a beautiful and fascinating book. With Claudia's eye for detail you just know the photography and layout is going to be extra special. It is also beautifully written, filled with anecdotes and the compulsive stories of the constantly-peculiar fraternity of world-wide collectors. There is also the occasional and tantalising peek into Claudia's own collections, particularly her obsession with robots. 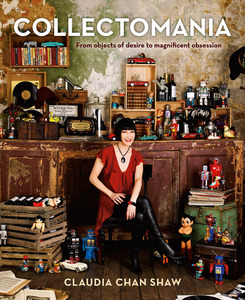 Collectomania is a book that will liberate all the bower birds living amongst us, and it is actually a terrific read, making even the most obscure collecting impulses come alive with stories, information and fascinating trivia. I was drawn in to her discussion of Bakelite and the several forms of early plastic that so liberated the fashion world when they were first made available. Who knew that plastics could be so fascinating?

Claudia charts the history of collection, reminding us of the Wunderkammer, the cabinets of curiosities collected by noblemen in an infinitely more charming age. As she points out, many of us have our own secret little Wunderkammer, boxes hidden away filled with strange souvenirs of our life, particularly our youth. Mine actually sits right on my desk, a hand-made wooden box that my computer monitor rests on. It hasn't been opened in years, but I know exactly what's in it: a couple of pieces of vintage Comme des Garcons that will never fit me again, some great jewellery pieces I wore in my dance party days, some notes and letters, a pair of fishnet stockings (don't ask) and a card deck I was given on my eighteenth birthday called "52 Handsome Nudes." Among other things.

Collectomania will bring back wonderful memories of items that loomed large in your childhood, and it will also inspire you to start taking seriously your own collections. It's a tremendous read, from cover to cover, and makes a gorgeous Christmas present, with its rich photographs.

Twitchy said…
Oh great review, this looks fascinating. All I need is a book like this to continue to enable me and my ridiculous collecting habits. I'd so like to be Zen and minimalist... But that's just never going to happen! :/
19 February 2013 at 01:01