For many years I'd heard of a mythical Vietnamese Mahayana Buddhist temple in the heart of Bangkok, but whenever I visited Thailand my Thai friends had never heard of it and assured me that no such place existed. My Vietnamese friends who had visited it were shaky in their grasp of Bangkok's topography, and couldn't give any useful directions.
One day I was wandering around Pantip Plaza and I saw two young monks shopping. Though they were dressed peculiarly (see my description in the video) I knew instantly that they were from the Mahayana school - a rare sight in Thailand. Using my minimal Thai and their even more minimal English I managed to get their address and visited them that day. Lo and behold, I had discovered my long sought for Vietnamese temple.
Most Bangkokians, even those living in the Chinatown district, have no idea that Wat U Phai Rat Bamrung on Charoen Krung Rd was established by a Vietnamese monk 300 years ago. They have just glanced inside and assumed it was one of the various Chinese temples that dot this part of Bangkok.
The families that make up the temple's devotees were once Vietnamese, but were long ago assimilated into Thai culture. All that remains of their ethnicity is their allegiance to this strange temple. The chanting is done in Vietnamese, but the parishioners (and the Thai monks resident) need to read the words transliterated into the Thai alphabet.
I have blogged some photos of the temple in the past.
There are two young monks from Vietnam resident, and they are rather unstinting in their continued Vietnamese-ness. They refuse to eat meat and they assume a rather more active role in the community than Thai Buddhists are used to.
It is a strange place, and one that I like very much. As soon as I get to Bangkok I always try to visit, and my Thai friends are always fascinated to learn about it. I guess it is a remnant of a much closer relationship that once existed between the two countries. 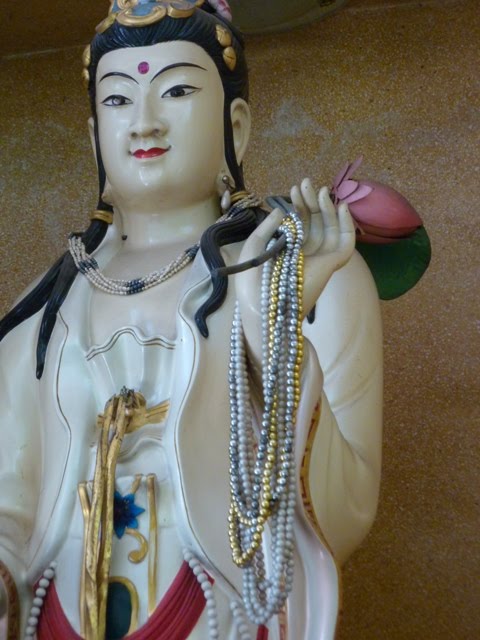