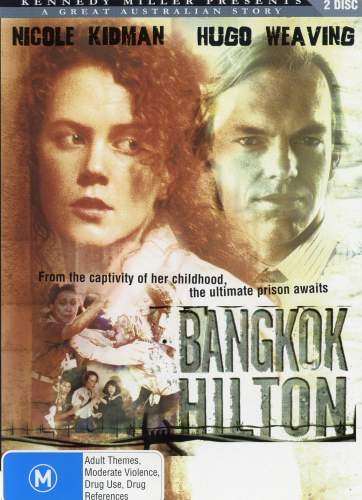 I was lucky enough to grow up in the age of the mini-series.
It's easy to forget what mega-events the newly invented mini-series were in the 1980s. The advertising for them would begin months in advance, and people could talk of nothing else. We all longed for the next mini-series spectacular, invariably "over three big nights."
I think it was The Thorn Birds that started it all, establishing the benchmark for the sweeping saga, the high camp and the resurrected movie stars that would come to characterise the mini-series as an artform.
Oddly enough, Australia was one of the countries that embraced the mini-series and made it her own. Naturally, the very acme of 80s Australian mini-series kitsch is Return to Eden, one of my favourite filmic events of all time. But I also really loved Bangkok Hilton, and it was the start of my lifelong devotion to Nicole Kidman.
I was at the Powerhouse Museum's 80s exhibition the other day, and they happened to feature Bangkok Hilton, along with some other wonderful 80s masterpieces like Starstruck, Sweet & Sour and Dogs in Space. I was overjoyed to discover that the museum gift shop was selling copies of the DVD of Bangkok Hilton, and I couldn't wait to get home and start watching it. I can honestly say that I hadn't seen it since I was 18 or 19.
And it was wonderful! Very overdone, very cinematic, and now the plot seems hopelessly implausible, but it was so extravagantly well done that it is impossible not to get caught up in the story. Denholm Elliott does a fine job as the alcoholic neer-do-well father, and Nicole is simply superb as a pre-Hollywood frump, still with wiry hair (what did they do to that?). And of course, in these days one can't help but draw parallels with the Schapelle Corby case, and wouldn't comparing the two make a fine academic paper?
It's funny because back when I saw it I knew nothing about Thai culture, but now I know enough to be sure that the whole thing must be deeply offensive to Thai people, and this DVD is probably illegal in Thailand, along with other such dangerous and treasonous fare as The King and I.
I doubt something so costly and so ambitious could be made for Australian television now. So find a copy of the DVD and give it a go. As you watch it, reflect on the final, glorious days of the Australian mini-series.
Email Post
Labels: 80s actors plot Thailand TV