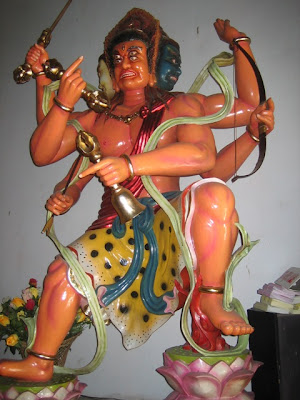 While I was in Vietnam I spent some time at Khuong Viet pagoda, one of the few Vajrayana Buddhist temples surviving in Vietnam. Hundreds of years ago Tantric Buddhism was the most dominant kind in Vietnam, but Buddhist schools are as much subject to the whims of fashion as anything else, and over the centuries most temples switched allegiance to the more fashionable schools of Zen and Pure Land. Most temples in Vietnam today are a combination of the two, with an overriding devotion to the practice of chanting the Lotus Sutra - very few temples make any claims of specialisation.
At Khuong Viet, in Tan Binh District, the statues are quite distinct, and entering the main hall you realise that this is not a regular pagoda. Most impressive is the vast statue of Kim Cang Bodhisattva. Now, I have always been somewhat confused by Kim Cang. His terrifying statue is to be seen outside many temple doors, guarding the porch of the main hall. I have always assumed he is one of the myriad protector deities of Mahayana Buddhism, many of whom are manifestations of Avalokitesvara in her/his more wrathful forms.
Within Vajrayana Kim Cang (Vajrapani in sanskrit) is indeed one of the Dharma protectors, but his importance is great and he shares the prominent positions of Manjushri and Avalokitesvara.
He is in possession of his own sacred mantra, which can be used to break through ignorance and the clouded minds of the average human being.
Email Post
Labels: bodhisattva buddhism Kwan Yin statues tantric temple vajrayana vietnam