Around 80% of the Buddhist temples in Vietnam claim to be Pure Land, which means they advocate the worship of Amitabha Buddha and the recitation of his name.

This school of Buddhism is perhaps the most prevalent throughout East Asia. In Japan, for example, this is the most common form of Buddhism, having been popularised in that country by a figure called Shonin Shinran, who, during a period of religious and social turmoil, taught that faith in Amitabha and the recitation of his name were all that was necessary to gain a fortunate rebirth.*

Through reciting the Buddha's name and keeping his image and qualities constantly in mind we can hope to be re-born in Amitabha's Western Pure Land, where conditions are perfect for the practise of a proper life, and eventual reincarnation as a Buddha. 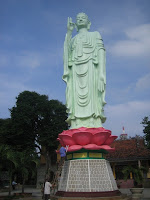 Buddha Recitation is certainly one of the most common forms of religious practise in Vietnam, and it is what all those beautiful prayer beads and bracelets are for. People also commonly recite the name of Kwan Yin as a form of prayer and meditation. 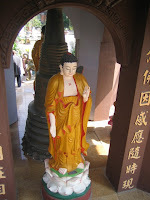 Statues of Amitabha are less common. Most prayer halls feature a large statue of Sakyamuni Buddha, and smaller statues to Kwan Yin and Ksitigarbha, the protector of the dead. And while they advocate Buddha recitation as an efficacious form of devotion for the laity, most temples recite and study the Lotus Sutra, as this is viewed as the pinnacle of Mahayana Buddhist wisdom, and as the one sutra that transcends all sectarian divides.

The Pure Land School has its own core texts, but few temples in Ho Chi Minh City recite them.

Amitabha is frequently depicted standing, with a hand stretched out in a gesture of welcome and blessing. And while he is rarely seen in prayer halls, you can see from these pics that he sometimes inspires the construction of mega-statues.

The idea of Pure Land is that the image of Amitabha is itself an aid to prayer - his name, his image and the visualisation of the perfect paradise in which he lives can all contribute to the eventual enlightenment of the serious devotee.