For the Oscar fans: A Purple Thread: The Supernatural Doom of Oscar Wilde by Nina Antonia

Since I was a teenager I have been a fan of all things Oscar Wilde.

So I was thrilled when my friend Therese Taylor alerted me to this exquisitely written, designed and illustrated booklet: A Purple Thread: The Supernatural Doom of Oscar Wilde. 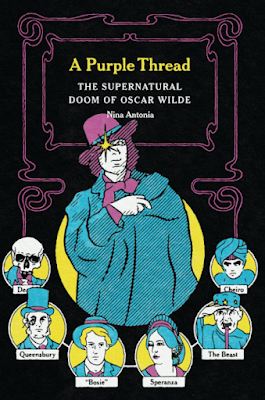 The fascinating author Nina Antonia has written a long essay discussing the occult thread that runs through Oscar Wilde and his family. It was such a thrilling thing to receive in the mail, and I sat down and read it instantly. I have since come back to it several times and used it as a reference in a couple of talks and courses I  have given.

A beautifully-produced literary object that will thrill anyone who loves books and who loves Oscar.

Produced by the craft-publisher Fiddler's Green, who always create literary objects that delight the eye and the heart.

It's also thrilling to get and read stuff like this because it reminds us as readers that books can now be of any shape and size. I for one would love to read more of this kind of stuff - engage, quirky and specialist essays lovingly written and produced for the sheer art of it.