Last year I put together a talk on Cecil Beaton for Ashfield Library. He'd been a minor obsession of mine since I was a teenager (I had always loved the movie version of My Fair Lady) and I had read some of his books and diaries over the years. Once I had to write the talk it gave me a chance to research him in depth and to read everything by him that I could get my hands on.

One of the books I managed to get online was It Gives Me Great Pleasure. I ordered it simply because it was by him, and I had no idea what it might be about. I was disappointed when it arrived to discover that it was an account of a year (1955) in which he travelled across America to give lectures for the American Ladies Clubs. It looked like it would be terrible, and gave every impression of being something he banged out because he didn't have any better ideas that year but still needed cash. 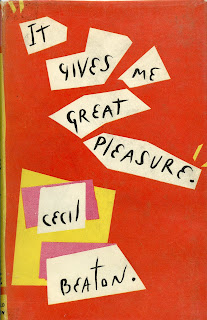 I couldn't have been more wrong. When I finally did pick it up and start reading I discovered that it was beautifully written, funny, charming and extremely interesting - Beaton at his best. In fact, I recommend it now to anyone wanting to find out more about Cecil Beaton.

The book also alerted me to a beautiful line from the Elizabethan poet Sir Philip Sidney (Beaton really was terribly well read): look in thy heart and write. This line, Beaton tells us, was what inspired him to write the book. Ever since I have kind of taken it as my own creative motto.

Beaton was, of course, an aesthete par excellence, and famous for his louche lifestyle and his friends among the rich and incredibly famous. He had not, however, come from upper-class stock. His father was an extremely successful timber merchant, and after Cecil left Cambridge he had made an effort to be a part of the family firm. He was utterly miserable as a timber merchant, however, and the timber industry's loss would soon become the world's gain after he ran away to America and began to pursue photography and gossip mongering in earnest.

In It Gives Me Great Pleasure, Beaton writes how he had no confidence in his ability as a speaker and so he engages the services of an eccentric voice coach. Right from the beginning of this book Beaton proves just what a beautiful writer and brilliant storyteller he was, and the funny anecdotes begin from the very first page.

Arriving in Manhattan to launch his tour, he stays in a suite of rooms that he had been engaged to decorate the previous summer. Like many creative types, Beaton was forced to do all kinds of work to boost his income, and he was also a great deal more talented and creative than most. He decorated houses and apartments, took photographs of celebrities and royalty, wrote articles and gossip pieces for the newspapers and magazines and designed sets and costumes for the theatre. He kept himself very busy. I am not sure which particular hotel he is referring to here, as he decorated a number of them. I suppose if I cross-referenced this against his diaries I could discover this, but I am lazy and would rather throw this out to my readers - does anyone know?

Beaton had always been in love with New York, and he travelled there as soon as he was old enough and had enough money. He was to visit it annually almost every year of his life. He was not, however, completely uncritical in his evaluation of that city. "The New Yorker," he writes in the book, "has made a habit of complaint." Oh, if he could only watch an episode of The Real Housewives of New York! This statement reminds us that Beaton was, at heart, an Edwardian gentleman, and he still embraced that Edwardian taboo against excessive complaining. While in New York he further indulges his love for the past by attending a performance of Oscar Wilde's Lady Windermere's Fan.

Just before embarking on his tour of America he had made (doubtless at Savile Row, where he had a favoured tailor who made his clothing all his life) "a wonderful new suit of pearly grey, cut by my London tailor in an Edwardian, nay, Victorian style." This suit was to make a great impression on his audiences, making him look even more picturesquely English and old-world than they had dared to hope.

Though he was only just 50 when the book was written, Beaton plays up to an affected fogeyism, again exaggerating his archaic look, speech and manners. "I hate machines of every description," he sniffs at one stage, "have no luck with them." But of course, his entire career was built on his manipulation of machines, specifically cameras and the primitive development and editing equipment he so famously played with in order to make his subjects even more glamorous than they already were.

In the book he refers to this other life as celebrity photographer. He tells a story of having just photographed Prince Charles (just a little boy at this point), and also his adventures while photographing George Bernard Shaw. The book glories in side anecdotes of celebrities he has met and known, including tantalising and snobbishly thrilling allusions to luminaries like Andre Gide (who he possibly slept with) and Jean Cocteau (a great friend).
Email Post
Labels: America camp Cecil Beaton fashion gay gay icons homosexuality Manhattan queer