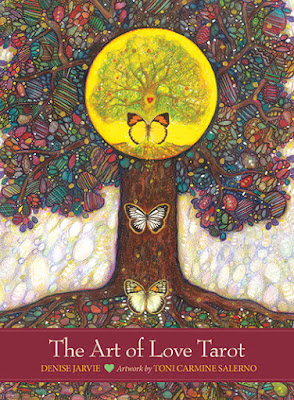 People often ask me what kind of deck they should use when they start to learn tarot. Now, I used to be quite a fundamentalist about this. "There's no point in learning on anything other than the Rider Waite," I would tell people. That is the deck on which all of the others are based, so you might as well go straight to the source.

But age and wisdom have mellowed me somewhat, and I also remember that the deck that first got me really interested in the tarot and learning about it was Lucy Cavendish's wonderful but very non-traditional Oracle Tarot. So I also realised I was being a hypocrite!

So now I tell people just to go with what calls to you. You might like the Cat Tarot, a Buddhist Tarot or something wonderfully unexpected like the Victoria Regina deck (a personal favourite of mine). You will, eventually, learn the Rider Waite, but the starting point is totally up to you, and you should go with the images and symbols that make your heart sing. heart before head, every time. Tarot is like romance.

This all came to me last week when I opened for the first time Denise Jarvie and Toni Carmine Salerno's new The Art of Love Tarot. I immediately sank into its luscious beauty, its exquisite symbolism and its pure energy of transcendent wisdom. "This is the kind of deck," I thought to myself, "that I would love to give to anyone starting out." It's just so beautiful and such a pleasure to use and explore.

Denise Jarvie is a Sydney spiritual teacher whose work is known to me through her previous deck, The Flower of Life: Wisdom of Astar oracle deck. This deck, inspired by channelled teachings received by Denise, is richly poetic, and I have had some wonderful experiences with it right from the very first time I accidentally selected one of its cards from a bowl full of mixed cards left out at a trade fair. Denise's work is rich and poetic, and always informed by the kind of Universal wisdom which helps readers and those looking for inspiration find a pivoting point and a new place of focus.

Toni Carmine Salerno, who created the art for The Art of Love Tarot, needs no introduction. His artwork is well known to anyone who has spent much time on the spiritual scene in Australia, and he is the creative genius behind Blue Angel the publishing house responsible for this deck. So it carries the imprimatur, and the distinct artistic beauty, of the maestro himself. We are in good hands here. In fact, this is the first ever tarot deck he has illustrated, so it makes this deck something utterly unique.

It is a somewhat non-traditional deck, with the suits re-named, but it follows a form easily recognizable to anyone who knows the tarot. And beginners can just have fun exploring its loveliness and potential. It is NOT about romance. Instead, this is a tarot which lays out the pathways of Universal Love, and as such it is a genuine gift to the world.

At random I select some exquisite cards which instantly sing to me with meaning and moment: 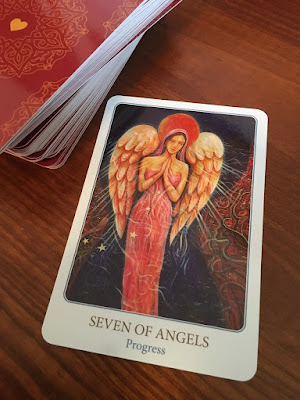 The Seven of Angels

The suit of Swords has been re-imagined as the Suit of Angels in this deck (I love it!) and this card is about freedom to fly and our capacity to see beauty everywhere. 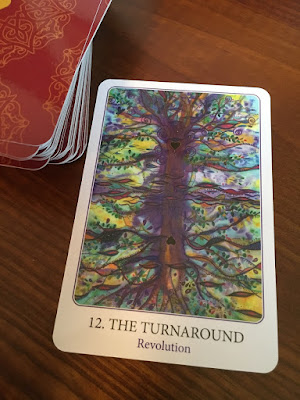 #12 of the Major Arcana: The Turnaround

This is this deck's re-imagining of The Hanged Man, and this vibrant card excites me no end with its meaning of new possibilities and little bit of life shaking. 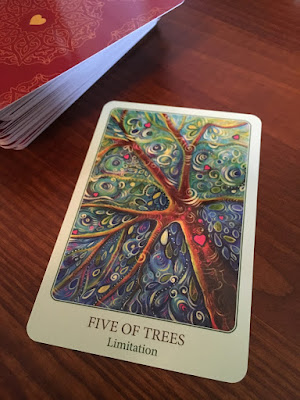 The Five of Trees

The Pentacles become Trees in this deck, and tree imagery has been flying at me for a few weeks now - this suit keeps coming up for me whenever I use this deck (which has been every day since I received it). Staring up into that lovely branch and leaves I am alerted to my own tendency to concentrate on the denseness of problems and forgetting the true perspective of life and possibility.

See how exhilarating the deck is?

Grab a copy as soon as you possibly keen (it's not out yet, but it's available for pre-order everywhere) and devote yourself to a new tarot deck of true import. It will quickly become a new favourite.