Cecil Beaton was many things, but not least among his accomplishments was that of diarist. His published diaries, decorated in their original editions with vivid jackets designed by him, were great sellers in their day, though they were heavily edited to make him appear less bitchy and also to leave out much of the gay stuff.

I am not going to criticise him for that – it was a tough time to be a gay man, and when he was growing up the gay world in England still existed in the shadow of the Oscar Wilde scandal.

But despite heavy editing, Beaton’s diaries were wonderful reading, still filled with gossip and observation. He was scrupulous in keeping diaries, and he attended to them even more when he felt he was doing something special. He was a born diarist and, I think, one of the greatest of the twentieth century.

Those colourful first editions are worth a fortune now, though I can remember working in a second-hand bookshop in the nineties when no-one wanted them and we sold them for $4 a piece. Oh how I wish I had bought them then – I could easily have made up a whole set (6 volumes in all), which now sells online for around $4,000 (with their dust jackets).

As I said, during special projects he kept more detailed notes, conscious of using them for publication, and in this way he created a book from the film production of My Fair Lady. 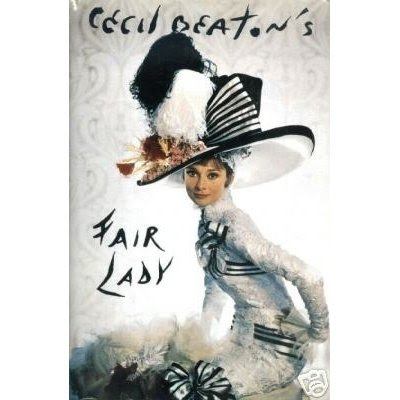 This wasn’t a happy time for him (you get the idea reading the book, but he couldn’t be as open about it as he might have wished), but the book stands as a fascinating look at the production of a film written by an insider who is not the normal actor or director who might normally pen such a memoir. Instead Beaton was in charge of the clothes and the settings, as he had been for the Broadway and West End productions of the musical. Cecil Beaton’s Fair Lady is one of the most unique film books ever written, and deserves to be more widely known.

In recent years Beaton’s biographer Hugo Vickers has set about editing and publishing unexpurgated editions of the diaries, and these make for marvellous reading. They are even cattier, and come replete with sex and gay gossip – all the stuff that had to be left out while Beaton was alive. The Unexpurgated Beaton, a monster of a book, is a perfect place to start, and will thrill anyone with an interest in mid-20th century fashion, film and popular culture.

Film stars galore (Danny Kaye cooking Chinese food! Mae West squeezed in her tiny apartment which is “such a riot of bad taste”! Watching Noel Coward on TV and thinking he looks “like an old Chinese Buddha”!), and also touching details of Beaton’s twilight years and his affairs and attempts at romantic happiness.