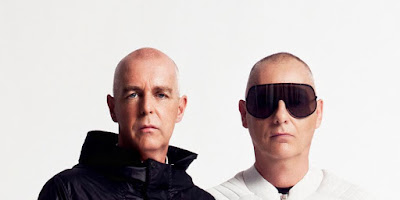 Was thrilled to discover over at Boyculture that there is going to be a new Pet Shop Boys album in April.

The Pet Shop Boys are one of the great 80s acts and they have consistently put out good music over the decades. I buy every one of their releases, and I don't really think there's ever been a dud. 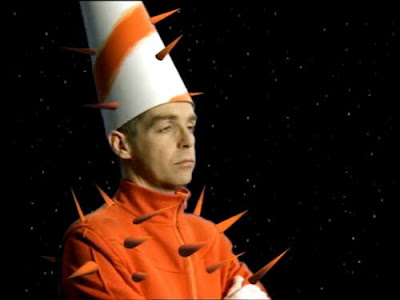 They first came to my notice in 1985 when Opportunities was first released. The distinct and unusual whiny vocals of Neil Tennant made it instantly noticeable, and I loved the dorky high-techness of their sound - it reminded me of Soft Cell, a band I'd been devoted to since I was 12. Later on at high school the song Suburbia became something of an anthem for me, and I still love its sophistication.

When I left home and went away to university, all of my suspicions about the Pet Shop Boys were confirmed. They were on the very edge of being open about their homosexuality, which was still a rare and brave thing in the late 80s, and so the clique of gay guys I hung out with held them in extremely high esteem, just a notch or two below Erasure and Kylie Minogue.

When I went back to my country town for the school holidays the newly-opened cinema was paying the Pet Shop Boys movie, a camp extravaganza which attracted appalling reviews but which I loved. I went to see it several times, and my little sister, just a child, adored it instantly. It is still an amazing piece of surrealism which I recommend you hunt down.

Then there was the much-anticipated release of the Domino Dancing video clip, an outrageous piece of overt homo-eroticism which was a really important moment in Queer culture. We were all raving about it. At this stage (1989) the Pet Shop Boys were more or less openly gay. Their music was a feature of our infamous house parties, and well I remember dancing the night away to Heart. A close friend sent a love letter to Chris Lowe.

The albums that followed were spectacular - odd, literary and frequently challenging. They did a Dusty Springfield album and a Liza Minnelli album - both still on high rotation at my house 25 or so years later. The dance party era was always peppered for me with Pet Shop Boys highlights - everybody in a frenzy at Go West at the Mardi Gras party, the dance floor at the Exchange writhing with people dancing to their cover of Can't Take My Eyes off You.


I even managed to see them live a couple of years ago, at a sparsely attended New Year's Eve party on Sydney Harbour with Culture Club and Jamiroquai.

So now I look forward to April 1, when they release their new album called Super. And we can just be sure it is going to be super.