James Fry on creativity and finding a medium


This year I read James Fry's superb memoir of bullying, addiction and redemption, That Fry Boy. I was impressed by its maturity, its nuanced discussion of complex social issues and by James' ability to tell a frequently difficult story with great compassion and simplicity. 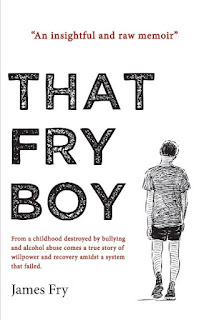 I jumped at the chance to work with him, and we had a really fascinating conversation about his book and his life at Balmain Library a few months later.

I thought I would ask James to write something for you all about his creative process and inspiration and why he decided to let it all out. Here's what he had to say:

Teenage drug addict and petty crim turned suburban father and university post grad whose only threat of overdose comes in the aromatic specter of one too many macchiatos.

My life story up until now may make it fair for some to surmise that not only do I dislike stereotypes, but at times—deliberately and sometimes by complete accident—I have managed to quash a few, too. Yet when it comes to the narrative that creative types are often driven by inner demons, it would seem I am someone who is at the vanguard of ensuring such a typecast isn’t lost.

Finding a medium to express my creativity was a search that didn’t present me with any real answers until I hit thirty. Only then did I begin to write with anything vaguely resembling a commitment. And not because I thought I might have any talent for the written word, but simply because I was so damn bored with my office job that I was willing to give anything a go. It’s not that I wasn’t appreciative of creative works up until that point. I had often found solace between the pages of a good book or strolling through the wings of a gallery. The creative works of others long spoke to me and my struggles in ways that I found little else could. The problem was, I could not speak back. And if I go too long without speaking back now, I begin to feel off kilter, fast.

As my children will be quick to attest, I have been bestowed with a set of fine motor skills that see even the simplest of requests result in catastrophic disappointment. When my daughter had just started to string sentences together, she asked me to draw her a bumblebee. A simple bloody bumblebee. Surely a father could deliver on the simplest of requests from a darling brown-eyed cherub who didn’t doubt for a second her dad wouldn’t grant this wish.   What she got was something that resembled a cow that looked like it had grown up on free-range grain from the fields of Chernobyl. She learnt quickly that her mum was the go-to for all future art-related requests. So when I finally took up writing, I was both surprised and deeply transformed when I discovered that I was able to produce something that others might find readable. No longer was I just a mere consumer of creativity; I could be a producer, too. I exhaled a long-held breath—one I had no idea I had been holding for all that time. The demons now had an outlet. The demons I had sought to quash with drugs, booze and sex during my years of active addiction.


Through my own experience, and now countless conversations with fellow writers, I have found that the love—and hopefully some accompanying talent—for writing often isn’t realised by most of us until we are well into our adult years. This is in sharp contrast to those with a capacity for the visual arts, for whom their potential is generally both recognised and encouraged from the earliest ages.

In a recent edition of the Tasmanian literary magazine Island, a spotlight was shone on the inspiring prison literacy initiative Just Sentences. One participant, who appeared under the alias Peter, hadn’t attempted creative writing until his sixth decade on earth. With just a small bit of assistance, not only did Peter’s general literacy skills rise remarkably, but also in the process he found a love for creative writing. ‘I’m a lot happier writing,’ he said, despite still calling prison his home. ‘I got my own way of putting my thinking—it may be mad to you all but to me it’s my way of saying things’. The discovery of a new way of connecting like Peter has, is something that I can deeply relate to.  A friend whose commitment to his writing only developed momentum on the steeper side of fifty, describes his drive to write using the Jungian concept of Eros versus Thanatos. The life drive versus death drive. He told me ‘if I don't now actively engage my creativity via Eros, it expresses itself via Thanatos in a kind of low intensity level guerrilla warfare, with my sanity and sobriety the target.’

Of course, neither age nor suffering, however common factors amongst creative types, are mandatory. The literary world alone is full of seemingly well-adjusted authors, some of who aren’t even old enough to vote.

Be that as it may, those writers who have experienced deep suffering often have a level of fire available to draw upon, in turn pushing them beyond that threshold where many others often decide they have had enough and down tools. A decision, which ultimately means that their manuscript, however promising, is never finished, or that potentially wonderful art work goes without those beautiful finishing brush strokes. Fortunately, suffering can also make for a highly readable story, too. When pain makes its way onto the page, it can strike a chord in the reader like nothing else. After all, if we live long enough, suffering will visit each and every one of us regardless of what our bank balance may be or what social circles we mix in. And not only is such pain something common to us all, it is something very few of us regularly talk about, at least not at a public level.

Finding someone else who has been able to articulate what we were either too afraid to say, or simply could not find the right words to describe, results in a powerful hook being unleashed upon the reader. Writer Andrew Solomon once told an audience, ‘The writer’s job is to say those things that appear unsayable, to cloak with language those volatile experiences that seem barely able to endure it’. F. Scott Fitzgerald sounded like he was trying to say something similar, though perhaps in a simpler term when he said, ‘What people are ashamed of usually makes a good story’.

With such an emphasis on suffering, you may be thinking that I spend my days in a depressive stupor of the kind that would give even Nietzsche a boner of Viagraic proportions. But as much as I may be driven at times by demons, discovering an outlet for these ghouls in the form of writing means I’m blessed with being able to transform something that was once utterly self-destructive into a source of creative inspiration. Something that rewards me even more is when I hear from readers that the very words born from the depths of my existence have left the page and have touched them in a way that has allowed them to acknowledge and release their own demons, too.