Had a full afternoon, and despite the pouring rain I found myself dashing all over the city doing all kinds of wonderful things. Got very damp and very cold, but it was worth it.
I trotted upstairs at Gleebooks to hear the intriguing David M. Henley talk about his new book Manifestations with the crime novelist (and my dear pal) P. M. Newton. 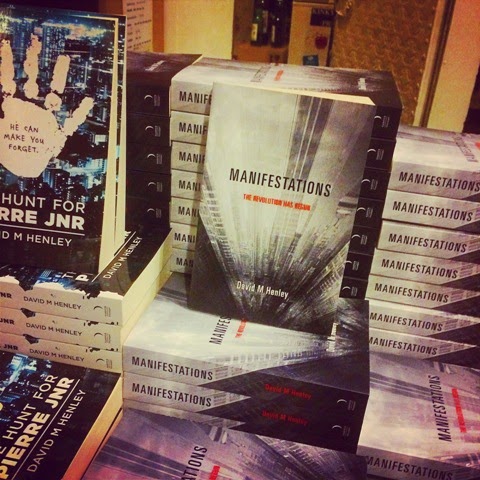 The book is the second in a proposed sci-fi trilogy published by HarperVoyager. David proved himself a deft salesman by responding, when I asked if I could read the books out of order, "Of course not - you must start with the first!" So I ended up buying two hefty books and carting them around. I do look forward to starting them, though, as the conversation with Pam Newton was most intriguing and set out a fascinating world which  touches on future politics and internet ethics. He also cited the redoubtable Philip K. Dick as a major influence, and every time I hear about Dick I am more and more interested in reading him.
David M. Henley is one of the guiding hands behind Seizure, one of the most handsome of Australia's literary magazines.
Spotted in the audience was publisher and editor Alice Grundy (who had a very good reason for being there), NSW Writers' Centre luminary (and accomplished critic) Portia Lindsay and internationally renowned book publicist Emma Noble.
I had to sneak out before audience questions because I had another engagement, but I'm aware of the buzz surrounding David's books and am going to bed tonight with the first in the series, The Hunt for Pierre Jnr.