January Reads: Yes, I have a pile already

Inspired as always by the  fabulous A Work in Progress, I thought I would make the shameful admission that, on only the third day of the month, I already have a sizeable "Must Read" pile. I think I should be able to get rid of these by the end of the month. From the top: 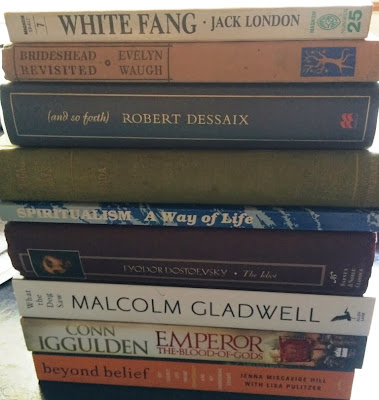 White Fang by Jack London - I last read this book when I was 12, but I have always remembered it fondly. I want to see if it is as good as I remember. I have noticed that London's reputation is rising once more, something I can only endorse.

Brideshead Revisited by Evelyn Waugh - Again, one I haven't read since I was a child. I think I was 15, and I absolutely loved it. I recently heard the terrific literary historian Susannah Fullerton give a talk about it, and I knew I had to read it again.

(and so forth) by Robert Dessaix - We all know I am a huge Dessaix fan, and I have never read this one.

Critical Studies: A Set of Essays by Ouida - For as long as I can remember I have been obsessed with the idea of Ouida. I think her essays will be a lot more manageable than her fiction.

Spiritualism: A Way of Life by Betty Pinnock - Got to read every book I can lay my hands on about Spiritualism. One of the most quaint and largely forgotten religious traditions.

The Idiot by Fyodor Dostoevsky - It's huge, what can I say? I have to do some serious reading occasionally.

What the Dog Saw by Malcolm Gladwell - I was really busy when this one came out, so I never got around to reading it. For the record, I am on Malcolm's side on every argument. Pissants.

Emperor: The Blood of Gods by Conn Iggulden - Now this is not the kind of book I would usually read. But I heard him interviewed on teh radio talking about his new series of books on the Wars of the Roses, so I thought I would check him out.

Beyond Belief by Jenna Miscavige Hill - I read every book that comes out about Scientology. One of my minor obsessions.
Email Post
Labels: books reading