One of the images you might encounter in temples around Cambodia is this one: 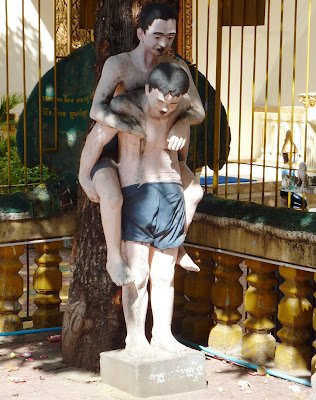 It had me puzzled for a long time, as it didn't belong to any recognisably Buddhist iconography, and yet it was always present somewhere on the grounds of Buddhist temples.

Eventually I asked my friend Kimly and he explained it was a representation of A Kvak and A Kven, the heroes of a popular Cambodian morality tale.

Two escaped slaves, one was blind and one was crippled, and so each was incapable of advancing far. Meeting each other on a riverbank they realised that if they combined their skills then together they could achieve much. And so, relying on one another, they went out into the world and became rich men.

The importance of this tale in Cambodia is significant. Obviously in a country where so many were damaged during long periods of war this tale of coming together for the common good held great moral and psychological power.

If you are in Phnom Penh you can purchase a picture book of the tale. 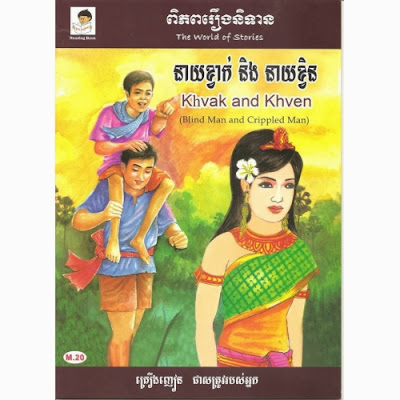 And here is a youtube clip from a Cambodian movie of the story:


If you would like to hear more of my stories about Cambodia, do come along to my night at Newtown Library on the 26th of November. More details here.
Email Post
Labels: cambodia folklore phnom penh