Bianca Nogrady on death, grief and confronting our fears

I thought I would ask acclaimed science journalist Bianca Nogrady a few questions abou her work and her philosophy. I think you will agree that she is a most fascinating person:

What is the title of your new book, and what is it about?

My latest book is The End: The Human Experience of Death, and that title pretty much sums it up. The book, which is narrative non-fiction, attempts to answer the question ‘what is death like?’ by exploring the final hours and minutes of life from a range of perspectives. It looks at why we die, namely the physiology and evolutionary mechanics of death; how we define and diagnose death; what we think death is like; what it’s like from the outside/bedside; the timing of death and how we can influence that; and how spiritual and cultural beliefs influence our experience of death. 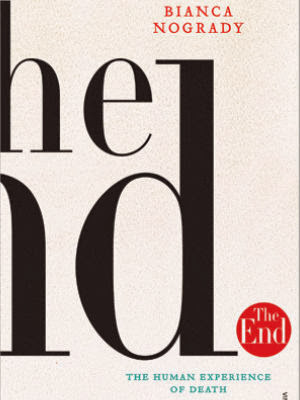 What kind of people did you imagine reading your book as you wrote it?

This book is partly a study for the curious, partly a guide for those contemplating their mortality, and partly also (I hope) solace for those who have lost someone.
Ultimately, I wrote this book to answer my own questions about my grandmother’s death. I also wrote it because after the birth of my two children, it struck me that we talk and write and share so much about birth but death is still such taboo subject. Which is strange given that not only do we all know we’re going to die, but three-quarters of us will see our death coming with enough time to prepare for it.
So why not understand it better, why not share our stories and experiences and learn from them, why not face our fears rather than run from them?

What did you do before you started writing books?

I’ve always been a writer of one sort or another. I attempted to write my first book in high-school: a painful, awkward, cliched romance that I wrote for the sole purpose of attracting the attention of Hollywood movie makers and my then celebrity crush Emilio Estevez. Needless to say, I failed on all counts.
My day job is freelance science journalist, which I love because it combines my two great passions: science and writing. I’ve been a science/medical journalist since I finished university and I think I’ll be quite happily doing that, and hopefully writing books too, for the rest of my life.

What book or writer did you find most helpful when you were writing “The End?” Any new literary discoveries?

I read Still Here by Ram Dass, when my grandmother was dying, and it definitely influenced how I viewed her dying and death, and influenced how I approached the subject. It made me aware that there can be a ‘silver lining’ to death, and that even in the darkest times of losing a loved one or facing death, there can still be light and hope.


It made me understand the gift that I received from my experience with my Nan, namely the opportunity to spend some extraordinary time with her, to say things I might never otherwise have had the opportunity or the courage to say. It was a very intense, emotional but also wonderful time.
I saw this often in the stories I encountered while writing The End. No one who had been at the bedside of a loved one dying regretted it, and even amidst the loss and grief and suffering, there was something wonderful and precious to be found.

Did you come to some kind of radical personal realisation while you were writing this book?

It certainly forced me to confront and explore my own fears around death. It was very difficult, interviewing people and hearing such heart-wrenching stories of loss, and I couldn’t help but put myself in every person’s situation and consider what it would be like to lose a husband, parents, siblings, friends, children.
I’m not necessarily afraid of pain or suffering. In researching this book, I have really come to appreciate what palliative care can do, and the extraordinary people who work within this field. I’m fairly confident that when my time comes, these people will do their best to minimise my physical and emotional suffering.
I have come to realise that I fear death because I’m the mother of two small, precious children, and I want to see them grow up and be by their side for all those milestones, big and small. I fear missing out on that, and I fear not being there for them. I fear missing them, and missing my husband. And there’s not really much that can be done about that fear other than to try to enjoy life with them while I have it.

What’s next for you?

I’m putting the final touches on a science-fiction novel - my first attempt at fiction (teen star-struck romances notwithstanding) - which I’m hoping with all my heart will find a publisher. I know fiction is a much tougher business than non-fiction, so I’m bracing myself for a storm of rejection letters secure in the knowledge that they won’t deter me and I already have sequels and other fiction ideas lining up in my mind.
The novel started out from a desire to write something fun after a year and a half of being immersed in death. It has been an interesting journey because I wanted to write a fun novel and instead have a world in which conflicts over resources are fought with bioweapons, so there’s lots of unpleasant death going on.
I also wanted to write a lead character who I saw as an amalgam of Willow (Buffy) and Velma (Scooby Doo) - a kind of sassy, groovy nerd. Instead I’ve ended up with a female version of Hugh Jackman’s Wolverine (minus the claws and regenerative abilities) who, rather enjoyably, gets to say and do all those jaw-dropping things I would never have the courage or opportunity to say or do!

What piece of advice would you give someone who wants to take the leap and explore their own creativity?

Start somewhere ... anywhere. Write the first word, then the first sentence, and then you have that loose bit of wool that you can pull on gradually, gently, until you unravel the whole story.
And it really doesn’t have to perfect the first time. It can be total, utter shite and you can roll your eyes over how bad it is, but at least you have something where before you had nothing. And something, you can work with.