An evening with Claire Scobie


Just back from an evening with travel writer and now novelist Claire Scobie at Waverley Library. Claire has recently published her first novel, The Pagoda Tree, and she was telling some of the culture, history and motivation behind writing the book.

If you haven't heard about it yet, The Pagoda Tree is based on the stories of the Devadasi, India's sacred dancers and prostitutes dedicated to the service of Shiva. Claire has set the novel in the 18th century, when these women still enjoyed considerable power and prestige, but were beginning to interact with Westerners for the first time. She said that she had been inspired to write about these women after reading a story about one of the last remaining Devadasi in the newspaper. This was a sad story - the woman in question was shunned and treated like a prostitute, and she had HIV. Claire, a historian and journalist, was first considering writing a full-length non-fiction book about these women, but she decided that she didn't want to write a book with such a sad outcome. So instead she conceived the idea of a novel, and here it is six years later.

We saw some remarkable photographs of the big temple of Thanjavur, the sacred precinct in which these women served and the setting for The Pagoda Tree. It is dedicated to the deity of Shiva Nataraj, the dancing incarnation of Shiva.


The walls of the temple are carved with the images of these dancing women, and on one wall is engraved the names and addresses of these women from the 11th century. The dancing once practiced by these sacred courtesans now survives as Bharatanatyam dancing, and is still taught in India.

She also visited the present Prince of Thanjavur, Babaji Raja Bhonsle, and he met with her in the quarters that were once the royal harem, another of her novel’s settings. The Senior Prince runs an e-publishing company and is rather desperate for more tourists to visit his decaying palace, as he can’t afford the upkeep. 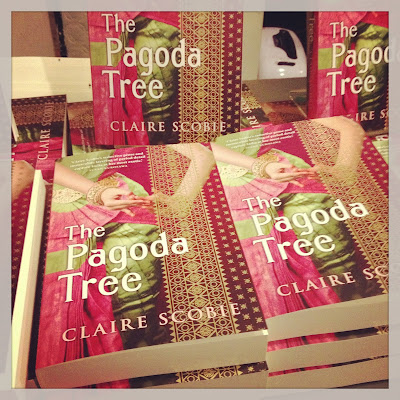 Claire spoke quite a lot about writing and the creative impulse. She suggested that writers who are stuck should turn to paintings and art for inspiration. She was herself inspired by historical images of the Devadasi, and says that spending time with art of the period in which you are writing can be quite valuable.

Here are some more of Claire’s tips for the aspiring novelist:

-  Read books about writing and attend writing classes. Starting out, Claire had no idea how to approach writing a novel, and so she spent some time educating herself. She says we can learn to become better writers, and that writing is a craft like any other that can be improved with education and practice.

-  Find a writing buddy – someone who will challenge you and keep you on the straight and narrow.

-    Do all your writing in the morning and all your admin in the afternoon.

-    Don’t underestimate the impact of sound. Try recording the sounds of places as you research your writing.


Claire will be appearing in Darwin on the 21st August. More details here

Claire and I will both be appearing at the Morning Read at the Melbourne Writers Festival on Sunday 1st September. More details here