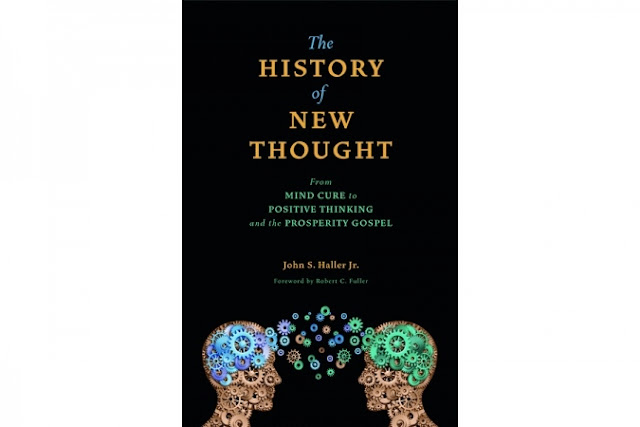 New Thought is, perhaps, the most influential philosophical and religious movement that you’ve never heard of. It lies at the heart of most of what we recognise these days as self-help culture, and it informs many of the millions of pages that have been written and so enthusiastically purchased by people in the West keen for some of the answers to life’s more pressing problems. Oftentimes when people are criticising some of the substance and conventions of popular self-help literature they are in fact decrying the major tenets of New Thought, and have no idea that they are criticising a religious and cultural institution that has its roots deep in American literature. Those lazy and clichéd condemnations of self-help books that you read in most newspapers around the middle of January every year are in fact deeply ignorant of the history – and even the existence – of New Thought.

Hopefully this fine new history of the New Thought movement might go some way to remedying this shameful gap in the knowledge of most literary, cultural and religious commentators. John S. Haller Jr. Has written an exhaustive and thoroughly modern account of a movement that has deeply affected the way we think and speak, but which remains largely unheard of outside of specialist fields.

In fact, Haller claims that New Thought introduced a sophisticated theological understanding into nineteenth century American thought, providing a liberating and progressive idea of the Godhead that found a place for women, the socially aberrant, the spiritually questioning and almost anyone else looking for a non-dogmatic home. The New Thought theology was based in large parts on the writings of 18th century mystic Emanuel Swedenborg, but also on the romantic and vaguely orientalist writings of Emerson and Whitman. It grew out of the Transcendentalist movement and never really lost its scrubbed and wholesome Protestant leanings.

The genius of New Thought was that its proponents never confined their ideas to the pulpit or the academy. They were keen users of the printing press, and New Thought journals, books and poetry became part of the mainstream literary scene. Americans (and, not much later, Europeans and Australians) became acquainted with a simplified positive thinking philosophy that represented the surface of New Thought Metaphysics. As Haller points out:

“By the 1930s, millions of people were participating in some form of mind-power exercises. A large part of this newfound popularity stemmed from a change in focus from health to prosperity...”


Earlier metaphysical teachers such as Phineas Parkhurst Quimby and the legendary Mary Baker Eddy had stressed the healing properties of these new metaphysical teachings, operating as they were in an age when the practice of medicine was anything but reliable. But New Thought gradually grew away from its religious and healing roots and instead embraced a keen worldliness, encouraging everyday readers to work towards self-improvement, thereby echoing the earlier writings of self-help proponents such as Samuel Smiles.
This History of New Thought is in many ways an exercise in reclamation. Haller, like me, sees a neglect of New Thought in most studies of American literature, religion and ideas, and, given its enormous popular reach, this seems foolhardy:

“When dusted off and brought to life, however the literature shows clearly that New Thought played an important role in defining the social, religious and political character of American life and culture. Thinking and writing about New Thought brings one to the very roots of the American psyche.”


John S. Haller Jr. writes in a lively and accessible manner, making this book constantly fascinating and entertaining. This can’t be said for the earliest history of New Thought, the venerable A History of the New Thought Movement by Horatio W. Dresser, a book I once made the mistake of bringing along with me on a long train ride. Haller’s references and scope are all thoroughly 21st century, and the breadth and depth of his scholarship are rendered lightly in this constantly surprising and intriguing book.

One for scholars of religion, self-help fans and anyone who has ever wondered just how old is the pedigree of the self-improvement industry.