Sex, Drugs and Meditation - could you choose?

The 10 day silent Vipassana retreat is one of those spiritual rites of passage that I have always been able to avoid. Don’t get me wrong, I have done other long retreats, including an even longer Vipassana retreat at a rural monastery in Thailand. But they have never been silent and I have always managed to bend the rules a little. I used to sneak out for deep fried bananas in the evening, for example, and a bunch of drag queens and I set up our own little dormitory of outlaws.

But I have been tempted. A certain kind of personality seeks out these more severe forms of spiritual training. They appeal to us, perhaps to our internal state of self-punishment. Certainly in Mary-Lou Stephens’ simply superb new book Sex, Drugs and Meditation there is a frank recognition of the psychic demons that drive this particular retreant to submit to an incredibly punishing schedule. 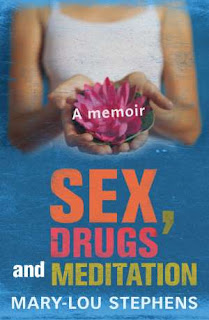 In a hot and dusty meditation centre in southern Queensland, Mary-Lou embarks on the famous course set out by the Buddhist teacher Goenka. This particular retreat marks a retreat, as well, from certain unpleasant factors in Stephens’ own life: a psychotic boss, an awareness of the approach of middle age, and a dull loneliness resulting from a misspent youth.


While meditating in complete silence for hours every day, Mary-Lou Stephens, an ABC radio celebrity and ex-country music star, deals with some much more tangible limitations. These included the extreme physical discomfort - and even pain - caused by sitting for extended periods, the irritations of a snoring roommate and the odd little tensions that arise in the hothouse atmosphere created by so many people intent on self-awareness.

Each chapter of this unique book is a day of this rigidly-structured ten-day retreat, and deals with the demons that arise as she meditates. It is a kind of sustained spiritual memoir that is rarely published these days, which is why it seems so very unique and makes for utterly compelling reading. It calls to mind some of the great classics of spiritual memoir, and will certainly appeal to anyone who has ever picked up St. Augustine’s Confessions or Therese de Lisieux's Autobiography of a Soul.

In a book which is, by any measure, a dangerous exercise in literary solipsism, the author Stephens manages to walk the tightrope between mawkish self-regard and bathetic personal misfortune very skilfully. She is warm, self-deprecating and retains enough sweetness and optimism to make me believe in her journey and leave me wanting her to succeed. A history of drug abuse, sexual misadventure and quite bitter personal jealousies have left her somewhat world-weary, but she retains a praiseworthy and impish pride in some of her excesses. Explaining her seeming lack of achievement, but ample life experience, by her early 40s, she says:

“...it was because I said yes.  I didn’t hang back and worry about security, even though on reflection I sometimes wish I had. I said yes and plunged into another new experience. It’s as though I’ve lived three lifetimes already. I don’t need to believe in reincarnation.”


I suppose it helps that this happens to fit in with my own personal philosophy, but I do believe that Mary-Lou Stephens speaks to so many people of a certain age who find themselves haunted by questions and uncertainties they had spent their youths denying. Throughout the book I was reminded too of Laura Dern’s exceptional HBO television series, Enlightened, though Stephens is a much more sympathetic character.

Sex, Drugs and Meditation has been my favourite read of the year so far, and I recommend it wholeheartedly to anyone who has attempted to create a more spiritual focus in their lives. Unpretentious, constantly recognisable and beautifully written, I think you should grab a copy, sit back and enjoy yourself. And wonder if you would ever have the fortitude to bear your own ten days of silence.

Susanna Freymark said…
I am halfway through Sex, Drugs & Meditation and so far Mary-Lou has not succumbed to deep fried bananas like Walter.
An honest and easy read. I am right there at the silent retreat squirming with Mary-Lou.
It is her writing that has me there, with her.
27 April 2013 at 18:55