I have been immersed recently in Australian Zen teacher Susan Murphy's extraordinary - and thought provoking - new book Minding the Earth, Mending the World. 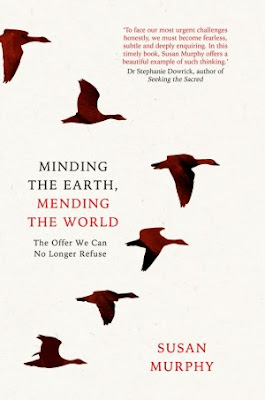 It is an examination of the Earth's ecological crisis from a Zen Buddhist perspective, and it is richly embellished with Murphy's warmth, wisdom and sense of place.


As well as being an educating and at times worrying read, it is also immensely interesting and engaging, and beautifully written.
Susan Murphy is a Zen Roshi, a recognised spiritual teacher, who leads a Buddhist community in NSW called Zen Open Circle, a group which is described as "a lively and very Australian Zen community that is open to every sincere enquirer, without exception."
In her book, Murphy somewhat controversially challenges the Judeo-Christian notion that the Earth was created for our use, and that its animals and plants are intended to be exploited by humanity. The creation myth many of us have grown up with has established the primacy of man (and she does mean man - the creation of Eve from Adam's rib intentionally subverting the natural creative power of women). But Genesis, too, can be re-read. The Edenic fall, Murphy writes, is rich in mythic symbolism and:

"...to look [at the Genesis narrative] from a subtler angle, so great is our shame at our persistent tendency to harm the bountiful earth and act towards it in bad faith that we cannot but see our guilty selves everywhere figured forth in 'nature red in tooth and claw'."


Susan has alerted me to a long interview with her which has appeared on the Ecobuddhism website (in two parts).  In these fascinating answers she alerts us to the difficulty of comprehending the truth and extent of global warming and talks about "the need to find a story that can carry us into forming a new relationship with the Earth."

But ultimately, I think, Murphy sees the possibility and hope in healing our world, not least through the exercise of meditative awareness and the establishment of spiritual community, In the interview on Ecobuddhsim she says:

"We are all moving together. Even the egregious things that are happening are a kind of testing of what is viable that is going to produce its own strong, perhaps dire, feedback: “This is not the way, go back. This won’t work. This is impossible and absurd.”"

Both interviews make for fascinating reading, and can be read here and here.