I think the first author I ever heard speak at a writers' festival was Anne Deveson.


I was so inspired by how she spoke about her struggles with bringing up a child with mental health problems, and I was somewhat starstruck too by the presence of this magisterial and very famous woman who had been such a towering presence in my childhood.
Deveson's books have all been intriguing, and her latest, Waging Peace is in many ways an exercise in reflection on her earliest memories. 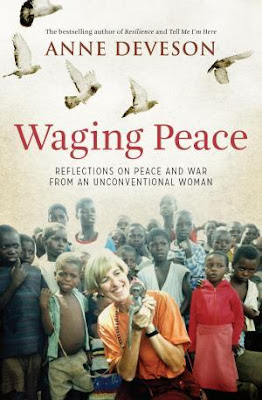 For Deveson was a child of war, and she knew first-hand the horrors of life lived in a war zone. When she decries the effects of war and violence she is not engaging in dramatic, feelgood rhetoric. She is speaking of something she knows firsthand.
This new book reveals why she has spent her later years so much in pursuit of peace and healing, especially in those parts of the world where violence has been a savage part of everyday life for far too long. Hearing her speak recently at Ashfield Library, I was moved by her stories of being in Rwanda in the final days of the massacres there, and moving amongst the traumatised and the dispossessed.
In Waging Peace she details the poverty and suffering that befell her family in the years immediately following World War Two. From a once well-to-do middle class family, the Devesons were reduced to penury in a world that no longer held a place for them. Her elderly father was reduced to being a travelling salesman while her once proud and fashionable mother spent much of her time avoiding greedy landlords chasing the absent rent.
Deveson's continued interest in politics, conflict and human suffering is palpable, and admirble in a woman who has reached the age where she could be forgiven for letting up a little. When I heard her speak she asked the audience if anyone had up to date news on the troubles in North Korea, and she allowed herself a little optimism aboput the state of humanity. People are, she recognises, much more likely now to seek conflict resolution and amity than at any point before us in history.
Like all her books, Waging Peace is an exercise in a particular type of memoir based around a theme, but her usual (pleasant) preoccupations with resilience, forebearance and scepticism in the face of power are still there and constantly make themselves manifest. She is surprised, she said, by how quickly memories begin to emerge when the author sits down and embarks on the journey of memoir writing.
Her work over the years has been exemplary, be it as a journalist, author, peace activist and lobbyist for conflict resolution to matronly purveyor of soap powder. Deveson is one of Australia's great Elders, a wise woman whose voice deserves to be more widely and regularly heard, reminding a youth-obsessed culture that the gentle wisdom of years is a great blessing, and a potentially great source of communal inspiration. 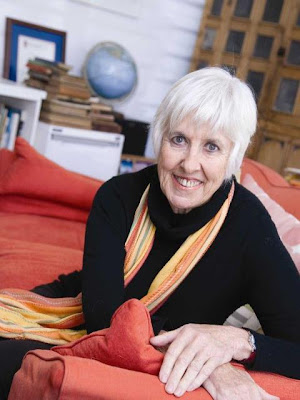 Waging Peace is a celebration, too, of the power and fortitude of women, particularly in the face of war and suffering. Deveson's own mother held her family together during periods of great suffering and tension during the war years, and she recognises this same quality of tenacity in the women she meets in Rwanda. Women who now govern, operate the law courts and clear the land mines in a land where so many men were murdered in a senseless confliuct.
As well as being a terrific read., Waging Peace is also a distillation of a lifetime's wisdom and reflection on the themes of war, peace and human suffering. It is an immensely important book, and one all Australians should read.
Email Post
Labels: advocacy Allen and Unwin Anne Deveson peace