Today I went to hear the wonderful Susannah Fullerton, Australia's foremost expert on Jane Austen, talk about the 200th anniversary of the publication of Pride & Prejudice. Susannah laid out the tremendous cultural impact of this beloved novel, and told us how Austen's reputation, slight at the time of her death, has grown and grown over the years to reach the cult-like proportions it possesses these days.


To celebrate the anniversary Susannah has written the most exquisitely illustrated and painstakingly researched history of the novel. This history, Happily Ever After, is an extensive catalogue of all things Pride & Prejudice, and I have been poring over it. What a fascinating world of Austen-mania! 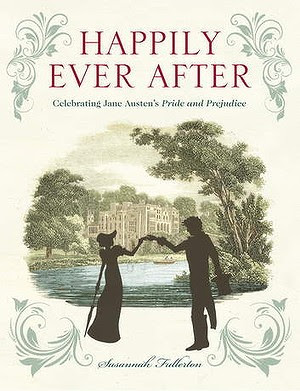 Susannah says that the Jane Austen Society is the biggest literary society in Australia by a mile, and I know I can count among my friends several Austen fans who can quote great chunks of the book by heart.

Happily Ever After really is the most fascinating piece of literary history, and is a tremendous read. The only other writer I can think of who is awarded this kind of poular examination of a single work is Proust. Fullerton divides the book into examinations of different aspects of this one novel, including chapters on critical reactions to Pride & Prejudice and on Austen's literary style.

She speaks fascinatingly about Austen's early champions, who included the playwright Sheridan, Mrs. Lord Byron, Robert Louis Stevenson and, much later, Rudyard Kipling, who wrote a short story about a group of Jane Austen fans fighting in the trenches during World War One.

For Susannah Fullerton it is Austen's ear for dialogue which makes this novel so loved and so distinctive. This voice is equally apparent in her letters, which Fullerton also recommends.


I came away from this delightful talk with a renewed interest in Austen, who, I must confess, I haven't read in ten years or more. The last time I really spent any time with Austen's novels was while living in Taiwan, where the the only English-language books available at the local bookstore were the works of Austen, which I read obsessively. I will certainly be downloading the complete Austen onto my Kindle and renewing my acquaintance in this anniversary year.