One of the most fascinating people to have come into my life over the past couple of years is the novelist Jesse Blackadder. Jesse joined the Writing and Society Research unit at the University of Western Sydney, where I am also a grad student. Since I first met her Jesse has released a fabulous historical novel, The Raven's Heart, and now this new novel about the first women to visit Antarctica, Chasing the Light. I had a chat with Jesse to find out what it was like to visit Antarctica and write about it: 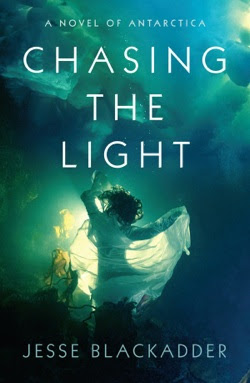 1.       Where did the fascination with Antarctica come from? Is it an old thing, or something you developed later in life?

It came later in life for me, and it came from a book. I read Kim Stanley Robinson’s beautiful 1971 novel Antarctica. Supposedly an eco-thriller set in an unspecified but near future, Antarctica is really much more than that, engaging with and challenging many of the conventions of Antarctic literature. It reflects on the glory and foolishness of the heroic era explorers, introduces other cultural perspectives (e.g. through the character Ta Shu, a Chinese poet who is part of the Artists and Writers’ Programme and whose poems and reflections on the feng shui of Antarctica are scattered through the text) and explores questions of becoming indigenous to Antarctica. Among the many things happening in this novel, women play a central role throughout, working in all aspects of Antarctic life. I was enchanted, and that feeling grew the more I came to read and learn about Antarctica. I became determined to go there myself.

2.       One of the principle themes in your writing is women’s strength and the reclamation of women’s place in history. Do you think we’ve moved ahead a lot on that front, or is there still a lot of work to be done?

Historical fiction is one place where so much reclamation of female history is happening – authors are finding snippets, hints, rumours of lost female history, and writing to bring it to life again. While historical fiction isn’t always historically correct – and doesn’t claim to be – it influences our world view, and restores women as active participants in history. Antarctic history is far more masculinist than that of most countries, which makes it a fascinating arena in which to work. There’s no other continent where women were physically prevented from setting foot. It’s an extreme case, but certainly in polar history there is much more to be done to incorporate female experience as a valued part of polar life.

3.       You have managed to turn an aspect of the research into your novel, Chasing theLight, into a children’s book due out in July called Stay: The Last Dog inAntarctica. From a writer’s perspective, this is a brilliant use of your time, research and skills. Any tips for other creative people on how to think laterally when it comes to productivity and creative output?

I hadn’t thought seriously about writing a children’s novel, but when ‘Stay’, the fibreglass seeing eye collection dog who has lived in Antarctica for 20 years, was dognapped and hidden in the Hagglunds vehicle that took me out on my Antarctic field trip, the idea started to seep into my creative subconscious. I’ve also just completed a feature for Australian Geographic on women in Antarctica that’s coming out on 1 March. My approach is to be open minded about where the research might lead me – a novel, a journalism feature, a blog post, a children’s story. To survive financially these days, writers often need to use the same research for more than one finished product. Of course you could also be smart and write a series of novels with the same characters/settings. That’s probably the smartest thing – and the one I’ve never managed.

4.        In spite of an incredibly gruelling research process that saw you travelling the world as well as engaging in the academic world you managed to finish Chasing the Light in very good time. What is your secret to actually sitting down and writing instead of getting lost in the process? Do you have any tricks, a schedule?

One big trick – a deadline. I can’t tell you how much more productive I’ve become with a publisher’s contract. Once HarperCollins expressed interest in the novels, I pushed my publisher Jo Butler to shorten the time I had available to write both Chasing the Light and Stay, because I knew the writing would simply expand to fill the time available. Armed with a deadline, I wrote on board the ship to Antarctica, at airports, in bed, on trains, in waiting rooms. It was especially true for the children’s novel, which was easier to dip into. A deadline has got to be the most inspirational thing for me. Mind you, I am still finishing up the ‘exegesis’ – the academic work that I have to hand in along with the novel in order to complete my Doctor of Creative Arts – and I’m a bit behind schedule!

Jeannette Winterson has enchanted, challenged and inspired me since I first read one of her novels in the 1980s, and The Passion remains one of my all time favourite books.

Elizabeth Arthur’s 1995 novel Antarctic Navigation follows the journey of a woman who sets out to re-enact Scott’s sledging journey to the South Pole. Like Robinson’s novel, it’s epic in nature, and powerfully elicits Antarctica, while raising fascinating and absorbing questions about the nature of life, science and reality. I still can’t believe that I won’t meet its main character Morgan one day.

The books that I first read in childhood – James Herriot’s All creatures great and small series about a vet in Yorkshire in the mid 1900s remain beloved and I revisit them every few years. 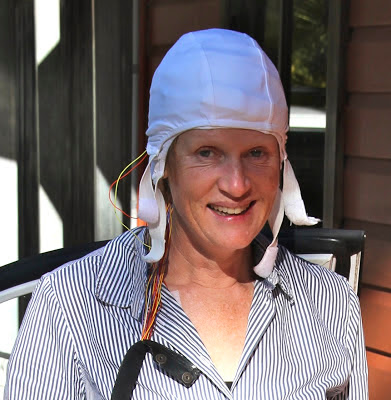 In  this photograph Jesse is wearing a white hat that covers a whole bunch of wires glued to her scalp. She  had to have a test to rule out epilepsy, as part of the stringent Antarctic medical, and wore this portable brain reading mechanism for three days. It's a good look, especially when she had to give a speech to a bunch of writers over that same weekend. She told them she was part of a test to see if writers had different brainwaves...

Jesse Blackadder’s website is www.jesseblackadder.com
Read a review of Jesse's previous novel, The Ravens Heart, in the Lambda Review, here.