Crowdfund It! An interview with Anna Maguire

One of the ideas that really seems to have found its time is that of crowdfunding. If you haven't come across it, crowdfunding is a relatively new way of funding projects through appealing to large numbers of people through the internet. Several websites have emerged that facilittate this process, and it has quickly become a useful resource, particularly for creative types.
Anna Maguire, whose background is in the mainstream publishing industry in Australia and who has become an expert on epublishing, found herself interested in this phenomenon and she has produced a brand new book on the subject called Crowdfund It! It is the first book directed specifically at Australian startups.
You can find out more about Crowdfund It! and purchase a copy here 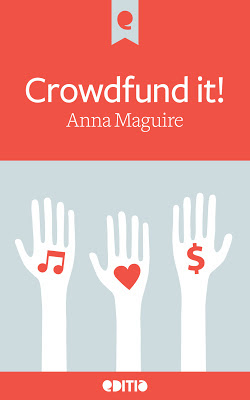 And find out more about Anna and how crowdfunding has inspired her in the interview below:

1.    Anna, who do you think can benefit most from your new book Crowdfund It?

When researching the book I was initially focussed on writers so Crowdfund it! would definitely be of benefit to them. However along the way I became inspired about different crowdfunding platforms and project creators who wanted to change the world, launch an entrepreneurial project, raise money for an art exhibition or record their album. So I would say that Crowdfund it! is aimed at those who want to investigate this growing phenomenon, read case studies of successful project creators and find out how to maximise their chances to successfully crowdfund.

To me, a simple way of explaining crowdfunding is to say it is helping make dreams into reality. The dream may be publishing your own book, a new indie album, funding publishing programs, a smart entrepreneurial idea, an iPad app or an album for the latest indie musician. Crowdfunding is able to be used for creative, charitable or entrepreneurial ideas.
Sometimes called peer-funding, it is when a group of people each pledge support to a project in exchange for a reward. Conducted through a crowdfunding platform where the creator outlines what they need the money to achieve, various forms of social media help you share it with friends and family, and your wider network. A lot of platforms operate on an ‘all or nothing’ model meaning if you don’t reach your funding target then you don’t receive any money and nor are there any fees.
Each crowdfunding project is also a story. The way the project creator tells the story behind why they want funding. Stories of hopes and dreams and being brave enough to publicly say what they want. There are stories of success and stories of missing out on reaching their aim. There are also stories behind projects launched, often with great care, that receive no funding or a single pledge. Were they too shy to promote the project? Did they think someone would discover them without any work? These are the ones that tug my heart.

3.    Any examples of crowdfunded projects that have been really successful?

One that really captured imagination and press worldwide was US Kickstarter project - Pebble: The e-paper watch for iPhone and Android Watch. Setting out to raise $100,000, they funded at over US$10M.
In Australia the record has been set by live video action Zombie game Patient 0 by IRL Shooter on Pozible. With over A$243,000 raised last year they also funded another $100,000 on the Pozible shop.
There are many inspiring people you find that have crowdfunded, and one I’ve looked at recently is author and illustrator Melanie Lee. Her book A Girl in the World was successful in achieving just over A$5,000 on Pozible. Produced in an eco-friendly manner, the books aim to encourage communication, connection and understanding environmental issues. A percentage of each sale also goes to Orphfund to help orphaned and vulnerable children worldwide.
I’m excited to hear that the project team will be running another project on social change crowdfunding platform StartSomeGood to raise funds for an iPad app.

4.    What books have inspired you most on your creative journey? More specifically, what has caused you to focus in epublishing and crowdfunding?

I have spent most of my career as a producer, rather than a creator. Producing books, producing website – dealing with the creative output of others. Until I started blogging many years ago, and more recently wrote Crowdfund it! I saw myself only as someone who worked with the creative output of others. That is slowly changing. I read mainly fiction and have spent most of last year reading books by Australian Women Writers. Also reading by recommendation, it’s meant that I’ve discovered some of the amazing writers in our country and blogged about many of them. Thanks to recommendations, I’ve made new discoveries like Claire Corbett, Margo Lanagan and Cath Crowley. My life is all the better for expanding my knowledge (and admiration) of some of our wonderful women writers. As someone who focusses on non-fiction I have the utmost respect and admiration for anyone who can create wonderful stories.

With a long career in book publishing and digitising content it’s exciting to watch digital publishing developments internationally and in our region. Speaking to publishing students allows me to share my knowledge. I enjoy educating writers on the available avenues for self-publishing in a professional manner. It’s a pleasure to work when you feel very passionate about a subject!

I began researching crowdfunding because I wanted to give writers information on how to fund their books. Investing in a cover, editing and layout and so forth can really add up and crowdfunding offers the potential to cover some of your costs. It’s important to understand that crowdfunding takes a lot of preparation and time once the project has started. Only 50 per cent of launched projects actually succeed, often due to a lack of planning and promotion.

5.    What piece of advice would you give someone who wants to take the leap and explore their own creativity?

Take the leap. Don’t let fear hold you back. Fear of what others will think of your writing. Fear that you’re not good enough. Find the time if there is something you feel driven to write. I do understand the problem with time – with two young children it’s difficult for me to have the quiet needed to write or blog. The dark circles under my eyes are testimony to the fact that late nights are the only way I find time to work! But I AM driven to write and it’s one of my greatest pleasures – apart from the pleasure that comes when totally immersed in a world created by the words of others.