I have decided to do some serious reading over Summer. So here is my little pile of new books that will make me appear smarter and deeper than I actually am. From the top: 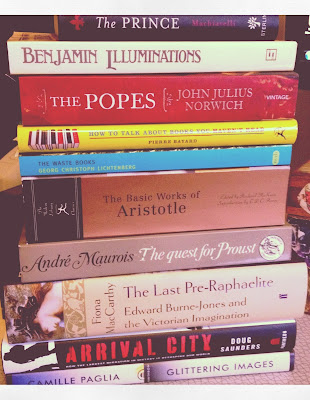 The Prince by Niccolo Machiavelli - My senior high school principal alerted me to Machiavelli in my final year of school when I was elected a prefect. In retrospect, that was a very peculiar thing to do. I encountered him again studying political philosophy as an undergraduate. It's time I read him once more, I think.

Illuminations by Walter Benjamin - If you have studied lit. at a tertiary academy in the past ten years it is impossible to avoid the name of Walter Benjamin. But guess what? I have never read him! Not a word! Well, I am about to change that.

How to Talk About Books You Haven't Read by Pierre Bayard - This is an invaluable skill, so I thought I should perfect it.

The Waste Books by Georg Christoph Lichtenberg - Until a month ago I had never heard of this book, but then I read Susan Sontag referring to it and I was consumed with curiosity.

The Basic Works of Aristotle - Bite the bullet, Walter. I walk around with an enormous inferiroty complex because I have never studied Western philosophy in any systematic way. This might mark a beginning.

The Quest for Proust by Andre Maurois - I am a Proust groupie and read anything Proust-related for pleasure. But it sounds so much more impressive than it actually is.

The Last Pre-Raphaelite by Fiona MacCarthy - Ever so  keen on the Pre-Raphaelites, but quite frankly, this book is very fat and quite terrifying. Could be fabulous, though.

Arrival City by Doug Saunders - I read an essay by Mr. Saunders in the Spectator ages ago and ever since then this book has been on my list. Basically he says what I think: that the global shift towards living in mega-cities is a good thing, and we should embrace, celebrate and facilitate this change in lifestyle. Looking forward to him helping me hone my arguments.


Glittering Images by Camille Paglia - The new one from La Fabulosa herself.