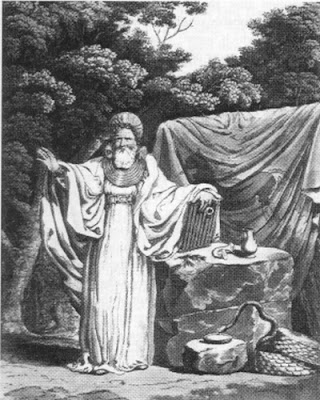 In the 1970s Druids were big. English chidren's television, which became Australian children's  television through the agency of the ABC, was filled with supernatural stories based on Druids and Druidic mysteries. I remember a particularly terrifying series based at Stonehenge where Druids turned out to be space aliens (I have no idea what this was called - I would love it if someone could indentify it for me), and of course one of my favourite shows was that almost-perfect series about a time-travelling Druid, Catweazle.

Much later in life I stumbled upon the Druids again, this time in my research into the esoteric and self-help movements of the Nineteenth Cenury. It was in this period that Druidry was re-invented, in self-consciously archaic secret societies that romanticised ideas of old England and rejected the stuffy, rigid Christianity of the era. In this period England saw a renaissance in antique social rituals and societies. Mummers, Oddfellows and Druids sprung up after an absence of hundreds of years. By the early 20th Century Theosophists such as G.R.S. Mead were talking up Druidry as a source of the continuous and ancient Wisdom that has always been at large in our world, though in different guises.

The Druids were, of course, an ancient priesthood (that was, apparently, open to women as well as men) that managed to preserve ancient Celtic religious rituals in the British Isles. The ancient Romans were said to have been terrified of them. Caesar wrote about them saying that they worshipped the same gods as the Romans, though under different names. The Roman disapproval stemmed from their habit of burning human sacrifices in wicker cages. Druidic horse sacrifices were still occurring in Ulster as late as the twelfth century.

Meyrick and Smith, the English folk historians, cast the Druids as a benign scholarly class in ancient England, and that is largely the way they are viewed now. These days Druids are seen as eco-warriors and maintainers of romantic ideas of wilderness and antique living. They cultivate groves and hold secret rituals within them, and in books such as Druid Magic the ancient tradition is cast almost a method of self-help, a way of channeling the wisdom of the natural and ancient world into achieving one's loftiest goals. 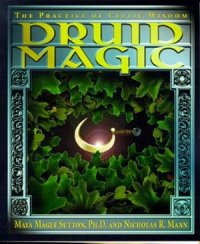 Most recently I was very interested in a BBC podcast on the excellent In Our Time series that discussed the Druids in a most scholarly fashion, placing them in history both ancient and modern. I do recommend you have a listen to it.