I think that memoir is perhaps my favourite genre.
I am a secret voyeur, and love the confessional mode. Memoir provides such a fascinating glimpse, not only into the "truth" of people's lives, but into the depth of their own self-created fictions. It is in memoir that people get an opportunity to rebuild a life exactly as they wanted or imagined it to be.
Here are a few I have just purchased and that have gone straight on to my reading pile: 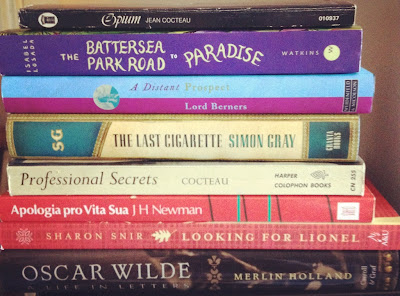 Opium by Jean Cocteau - Cocteau struggled with drug addiction, and this slim little volume is his memoir of life as an opium addict.

A Distant Prospect by Lord Berners - Berners was a British composer, a noted eccentric, a great pal of Nancy Mitford's and the model for Lord Merlin in her novels. A Distant Prospect is one of the very best childhood memoirs I have ever read, and I couldn't resist this beautiful hardcover edition, though I already own two other editions. That's how much I love this book! And of course, it gives me an excuse to read it again.

The Last Cigarette by Simon Gray - I don't know much about this one, except that I heard them discussing it on the BBC, and some said it was brilliant.

Professional Secrets by Jean Cocteau - Can you tell  that my Cocteau obsession continues? This is a type of autobiography assembled from various writings - an interesting idea. In it he discusses crickets in cages and travelling the world. No-one does style like M. Cocteau.

Apologia Pro Vita Sua by Cardinal John Henry Newman - I have been meaning to read this one for years. Some describe it as the best religious memoir ever written. I love the figure of Newman - strange, tortured little queen whose body is said to have been assumed into heaven.

Looking for Lionel by Sharon Snir - Here's a strange thing - this is the third copy of this book I have purchased. The first two I felt called to give away to people who I felt needed to read it. This one I'm keeping, and look forward to reading it properly, as the author Sharon Snir is a friend.

Oscar Wilde: A Life in Letters - Edited by Merlin Holland - Does this really count as memoir? I don't think so, but close enough. Basically I buy every book about Wilde that is ever released - he actually has his own bookcase in my house. Wilde's letters - and I have no idea what edition it would have been - had a major influence on my life. I read them attentively when I was 14 - they were the only queer thing I could find in my small-town library. So I look forward to returning to them, as I have several times in my life.
Email Post
Labels: autobiography memoir new books opium

The Studious Palimpsest said…
Have you read Celeste Albaret's memoir? It's fascinating stuff:

Anonymous said…
Hi Walter. One of my favourite authors, Rupert Thomson, has a memoir that I love perhaps even more than his novels: This Party's Got to Stop. Lovely grim England, strange childhood, weird episodes with brothers. Marvellous!
5 September 2012 at 08:58