If naked Chinese guys almost having sex with each other is your thing, then you're bound to enjoy the new Taiwanese film Girlfriend Boyfriend. 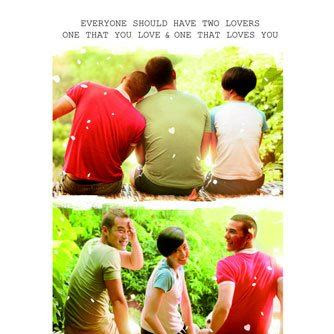 Apart from the physical titillation, it is also a fascinating piece of cinema on so many other levels. It explores the little known recent history of Taiwan, and the social mores and expectations of a conservative Chinese culture that is itself divided about its identity. In Girlfriend Boyfriend queer indentity stands parallel to a quest for a Taiwanese national identity, and I was intrigued right from the very beginning.

Starting during the period of martial law in Taiwan in the mid-1980s, we follow the romantic and sexual awakening of three youths: the silent, tortured and incredibly hunky Liam (the exquiste Joseph Chang), the racially-mixed natural radical Aaron (Rhydian Vaughan) and the androgynous girl Mabel (Gwei Lun-Mei).


It is impossible to give away who sleeps with who without giving some spoilers, so I will try to avoid it. Indeed at some moments one is left not entirely sure as to who was being fucked, and Mr. Noodlies and I both left with different impressions as to the extent of the triangle.

It's a beautifully made film that is extremely ambitious in scope. For me it became better, and the performances truer, as it progressed. I really think younger actors should have been used to portray the characters at high school, as the actors (with the exception of the always-perfect Chang) were tempted into camping it up a little, and for the first 20 minutes or so I thought this was going to be some kind of goofball high school comedy with a political theme. There was a moment in the movie, however, when the performances shifted quite substantially, and I began to be impressed instead by the subtlety and substance of the actors I had previously been groaning at.

The director Yang Ya-che has captured perfectly an arrested adolescent homoerotic longing which he has allowed to leak into the heterosexual relationships depicted on film, till all the characters are immersed in a psycho-sexual funk of self-loathing which only serves to heighten the eroticism of their encounters. The sexual politics of the film are, perhaps, suspect. But it is the actual politics which I found much more intriguing. I am not used to seeing the complex and subtle social problems of Taiwan and Taiwanese history depicted on film, and it is this alone which makes Girlfriend Boyfriend so well worth seeing.

At risk of repeatig myself, can I just state finally that the Taiwan heartthrob Joseph Chang is the absolute star of the piece.


In scene after scene his quiet, brooding hunkiness expresses perfectly the tumult of sexual desire we slowly learn is lurking inside him. He is perfect for the role, being neither off-puttingly pretty or antiseptically muscular. His naturally masculine, almost-chubby strength is a perfect expression of a certain mode of Chinese male beauty which I remember well from my time in Taiwan, and which matches exactly the role he is playing.


Girlfriend Boyfriend is well worth seeing if you know nothing about Taiwan or its history. And it is also a complex, subtle and ultimately very queer film which leaves the viewer with no easy answers.

Murielosa Cariñosa said…
Do you know if the poem "We're waves, welling up from the same ocean." is from some poet or from anywhere?
21 November 2013 at 15:26