Sometimes you end up at the wrong place, but it ends up being totally the right place.
While zooming around Kuala Lumpur in a taxi, we were constantly driving past a big and busy Hindu temple that was being renovated. It was never the right time to stop and have a look, but one morning I decided the time had come. I consulted my trusty map and found where it was and gave the taxi driver careful directions.
But this taxi driver had other plans, and instead he dropped us outside the Mariamman Temple on Jalan Tun H. S. Lee. 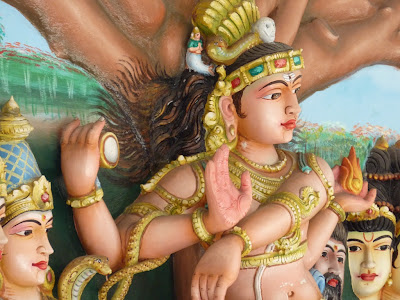 And this little temple turned out to be one of the most enchanting places we visited. 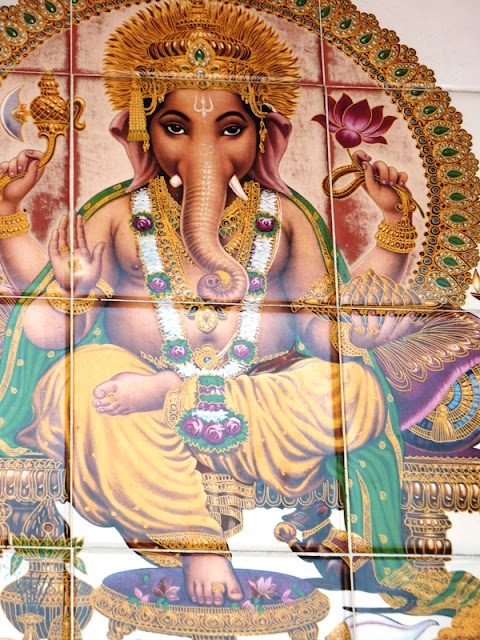 We had to leave our shoes at a kiosk outside, the man behind the counter putting them into a plastic basket and handing us a number. Once inside the place was crowded, but cool and quiet. The slender young Brahmins were busy at their devotions, and a large family were there having their twin babies blessed.
Part of their devotions was providing some prasadam - sacred food - for the temple-goers, and so we were invited to have the most delicious dhal while we chatted with the babies' lovely father and proud grandfather.
I was surprised that we were allowed to wander around and take photographs. 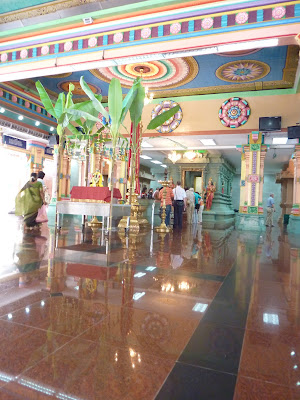 It was the first Hindu temple I have ever visited that welcomed this, and the whole atmosphere was friendly and welcoming. While we were there an enormous party of ederly Japanese tourists arrived and were soon snapping away happily, quiet and untobtrusove despite their numbers.
The temple was clean, spacious and cool, and elaborately decorated. I am headed straight there the minute I return to Kuala Lumpur.
Email Post
Labels: Hindu temple hinduism Kuala Lumpur Malaysia Mariamman sacred sites Sacred Travel temple temples