For many years Quy Nhon (also spelt, inexplicably, "Qui Nhon" on occasion) was a semi-mythical land in my mind, a kind of personal Shangri-La.

As a young man I spent a lot of time hanging out with Buddhist monks in Ho Chi Minh City, and the gang I ran with were monks from Quy Nhon. They were all smart, had motorcycles and, I must confess, were very, very beautiful. In the 90s monastic regulation was not particularly strict in Vietnam, and monks got away with a whole lot of stuff that would never be allowed now. For a start, anyone who wanted could go into the monks' quarters and hang out, and so every afternoon I would scurry up the dank concrete steps of the Thich Quang Duc Zen Institute in District 3 and spend some quality time with my monks. They smoked and ate the cakes I bought them, and they made a pet of me, taking me around the city on the back of their motorcycles and showing me all kinds of crazy shrines and grottos.

But when they spoke of their home town, their eyes would grow misty, and pretty soon I too had fallen for the fairytale vision of Quy Nhon. It was a paradise, they said, the very heart of Buddhism in Vietnam. Folktales have it that Buddhist monks from India washd up on the shores of Quy Nhon centuries before they ever made it to China, and so these monks count their pedigrees as dating beyond that of Bodhidharma himself.

I finally made it to Quy Nhon, many years later. All of these monks grew up, you see (they were the same age as me), and for the most part they went back to their beloved Binh Dinh province. And so I took my first flight  to Quy Nhon and guess what? Everything they said was true. It is one of the most beautiful and fascinating places on earth. Jam packed full of Buddhist temples which date back centuries, it is also home to the Cham peoples who had once built huge Hindu temples but are now Muslims. In Quy Nhon you can still find remnants of the tantric Buddhism that was once the most influential school in Vietnam.

Mostly I love Quy Nhon for the monks. Grumpy old ones, plump and laughing middle-aged ones, and naughty and chatty young ones.  Monks are everywhere, and Quy Nhon is the only place I know in Vietnam where businesses regularly give free stuff to monks and treat them with inordinate respect. I have spent hot afternoons in monk's cells, unable to sleep with just a fan and watching the slight breeze shift the fabric of the ceremonial robes hung up on the walls to dry out from the previous evening's sweat. 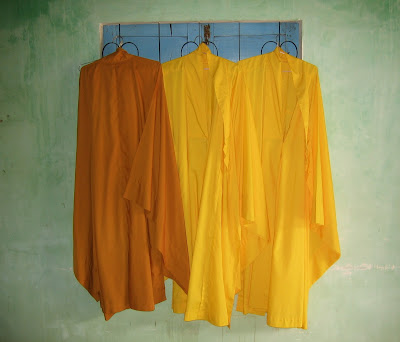 And right in the middle of Quy Nhon City is a 300 year old temple of subtle and somewhat run-down beauty. 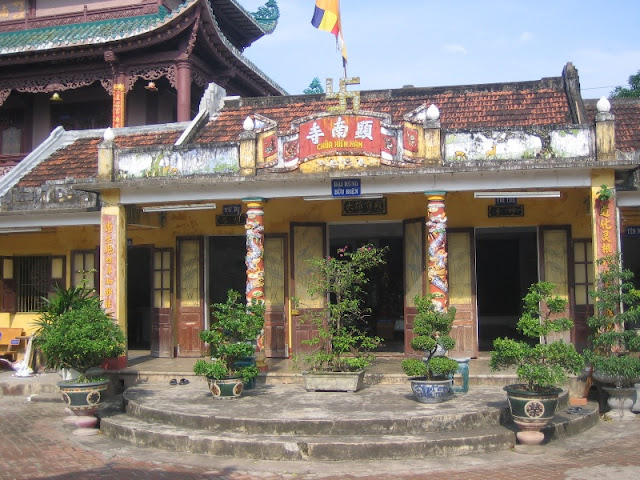 There is a much newer tower on the grounds as well, a high and kooky looking building that had been a vision in a monk's dream. 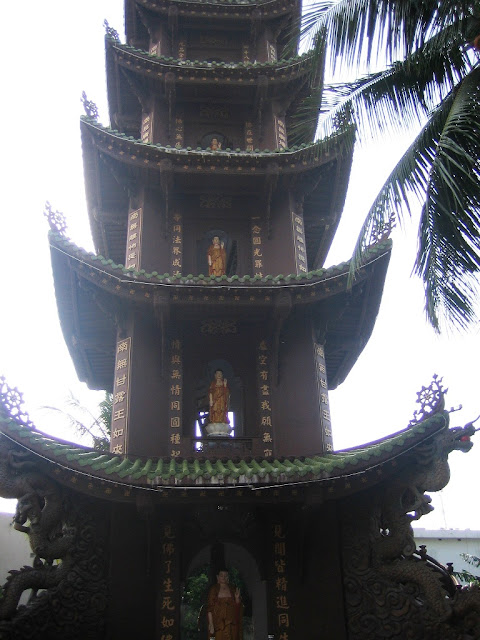 It was constructed as an act of devotion to Amitabha Buddha, who looks out from every arch and eave of the tower.

And further afield in the province of Binh Dinh you will discover exquisite little fishing villages, each built around the local temple. 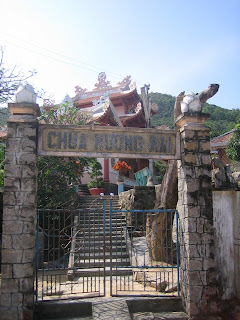 It is in one of these that one of my most beloved friends lives and I spend my days there on  the terrace overlooking the ocean, and thinking, "Must I ever go back?" 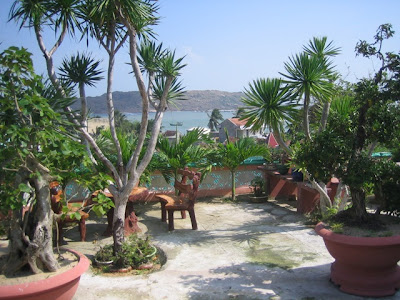