Skip to main content
Labels
Posted by Walter Mason May 24, 2012 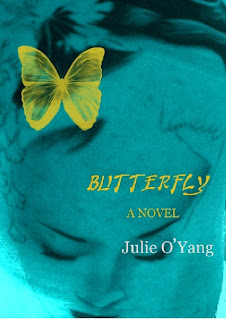 O’Yang has created an intriguing and quite complex world in this novel, and it makes a fascinating read for anyone interested in China and Chinese culture and history.

Butterfly: A Novel is also about women and the problematic tropes of femininity at work in Chinese culture. A repeated motif in the book is the presence of the Buddhist Goddess Guanyin, a feminine figure of the divine who is of enormous importance in the popular religious imagination, and oddly powerful in a religion and culture more noted for favouring masculine power. But O’Yang’s Goddess of Mercy is not the delicate beauty of Chinese iconography. She is cruel and occasionally whimsical, creating torments along with mercies. I must say I admired O’Yang’s bravery in tackling this particular archetype of feminine perfection. Because of course it is doctrinally correct – along with her merciful forms, Avalokitesvara is a wrathful creature whose charge is also to protect and defend the dharma.

“They say the butterfly fish was made by Bodhisattva Guanyin after she had had a strange dream.”

The Goddess toys with creation in her dreams, and much of this novel inhabits the same, dream-like, fantastical world in which fish-women exist alongside (though hidden away from) modernity. The sexy and sassy young nurses dress provocatively and go to all-night dance parties in sophisticated modern Shanghai, while moldering away in an attic lies a pathetically beautiful creature that longs for her old states of being and lives in a state of perpetual, but beautiful, regret.

The mythology of the fish-person has resonances across cultures, and it is frequently associated with a kind of female perfection and beauty which is irresistible to man. I was reading Butterfly: A Novel while travelling through Cambodia and Thailand, where in daily life I frequently heard similar legends and even saw them represented. O’Yang’s act of creation is, self-consciously or not, a step along in this older tradition of story-building, and the novel is rendered all the more complex and fascinating because of this.

It is a novel of grief and of desire, and at one point O’Yang writes, quite starkly: “desire is so strong you can’t afford the consequences.” But of course, it is the consequences of desire (which inevitably include death and destruction) that go to make up the events of this novel.  More particularly, it is desire mis-applied, or perversely directed towards that which might cause most chaos. It is dangerous and queer desire, the love of the wrong, and the forbidden connection between creatures that should never have met – in O’Yang’s book a fish-woman and a Japanese soldier. All of this, mind, taking place in the fraught background of World War Two Nanking, a place that has provided some rich literary pickings for Chinese writers, from Ye Zhaoyan to May-lee Chai.

Julie O’Yang has created a glittering magic-realist novel that explores desire and the cruel capriciousness of sexual attraction. It is a brave and sometimes challenging novel, and one that will enchant anyone interested in love, relationship and the eternal echoes of Chinese culture and mythology.
Email Post
Labels: asia chinese ebooks Kwan Yin novels reviews