Tennessee: Cry of the Heart by Dotson Rader

I have always been moderately obsessed with Tennessee Williams. When I was 14 or so I heard or read somewhere that Williams' great plays contained subtle homosexual  hemes, so I went straight down to my country-town library and borrowed an enormous pink edition of the Collected Plays. I don't know what the librarians must have thought - they could probably see right through me. 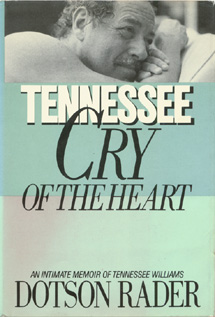 So I sat down and carefully and with great seriousness read my way through them. In all honesty my level of sophistication was not sufficient for me to be able to detect all of the sublimated homosexuality that the plays were said to contain, but I realised instantly that they were rollicking good yarns and, had I been aware of the term, I would have identified them as camp.
That same year I managed to catch Cat on a Hot Tin Roof on television. I enjoyed it immensely, but again most of it went over my head. I was more interested in the avuncular presence of Burl Ives, a man I'd previously only known as a singer, a great favourite of my beloved grandmother's.
My passion for all things Williams has remained, though this remarkable memoir tells me that at the stage that I initially became interested in him (the mid 80s) he was distinctly unfashionable and seen to be a quaint reminder of America's theatrical past. I have always maintained my conviction that he is a genius, and from what I can gather his star is on  the ascendant once more.
Tennessee: Cry of the Heart is a brutally intimate memoir of a lifelong friendship with the great playwright. Dotson Rader met Williams when he was in middle-age, a sick, bloated has-been who was an alcoholic and addicted to several different prescription drugs. Rader paints a picture of a desperately lonely man who had managed to push away almost everyone he was close to, leaving him with a senile mother who believed a horse lived in her bedroom and a mentally disabled sister who had been lobotomised when she proved too rebellious as a young woman.
Rader charts the end of Williams' life here with a fabulous honesty and an eye for scandal, sex and anecdote that kept me immersed in my reading when I should have been doing other things. His obvious love for the great American playwright doesn't stop him from cataloguing his foibles, his annoying paranoias and his occasional callousness in the face of friendship and even love.
The great love of Williams' life was the Italian American Frank Merlo. He lived with Williams as his companion for 16 years, and Williams called him "my little horse" for his elongated, toothy face and, as Rader so archly points out, "one other reason." Despite his loyalty and care, Williams treated Merlo with great cruelty at the end of his life, banishing his dying lover to suffer cancer all alone and not even going to his funeral.
A small and filthy house in Key West was the home base for the perpetually travelling Williams, and Rader himself lived there and visited there over a period of twenty years. The stories of Williams' perilous existence as an open queer in a horribly homophobic age do quite a bit to restore the reader's faith in his moral courage. When a New Orleans hotel refused to allow Williams and Merlo to stay in a room with a double bed Williams caused a huge scene, shrieking at the manager and demanding that they be given the room they wished. When the manager asked why on earth two men would want to sleep together in a double bed Williams, probably drunk and stoned, gave his most imperious glare and shouted: "Why, to fuck, of course!" After that he flounced out of the hotel and never once stayed there again, making sure all of his famous friends avoided it as well.
How Williams managed to live to the grand old age that he did is something of a miracle. Rader describes his decades-old morning routine:

"He arose early and made himself a martini, ordered a pot of coffee, and with a bottle of red wine in hand toddled into the living room and sat down at his portable typewriter...and worked until noon. Then he went to lunch and later took a swim. He maintained the same schedule until he died."


This is very much a queer memoir, and must have been quite scandalous when it came out (in 1985). Rader was by then a big-time journalist, but he is equally frank in this book about his own involvement in events - the drink, the drugs, the hustlers and general debauchery. In its candor it is ultimately affectionate and Williams is rendered, not as a great man of letters, but as a vulnerable, sensitive soul who craved approval and battled with the most enormous demons throughout his life.
Tennessee: Cry of the Heart is out of print these days, but easily available second-hand on-line. Do get a copy.