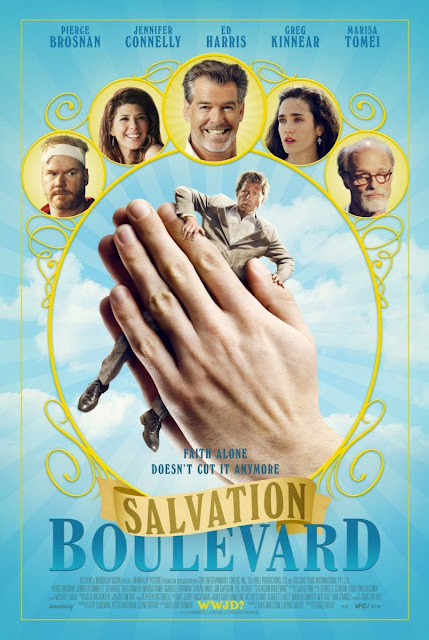 Salvation Boulevard is, perhaps, the most peculiar movie about religion that I have ever seen. And it is its peculiarity that makes it work, as satire, as social commentary and, ultimately, as a genuine and thoughtful meditation on what it is to be religious and what it is that religion brings to people.
The film takes several tropes of contemporary religion - the entrepreunerial megachurch pastor (played by Pierce Brosnan), the celebrity atheist - and mixes them with some things less recognisable to a mainstream audience, but still very much a part of the 21st century religious scene. 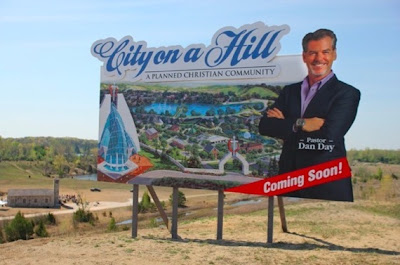 These elements include a doubting boomer-convert who was once a Deadhead, a cowered Christian teenager press-ganged into chastity balls and Hell Night theatre reviews and drifting, at-peace potheads who, it seems, have a better grasp of life than those more adamant about their spiritual "peace." Director George Ratliff seems to be genuinely interested in what it is that makes people embrace religious faith, and he expresses this in a manner that is at the same time very funny and quite subtly sophisticated.
Ratliff has previously directed a documentary on the Hell House theatrical phenomenon of born-again teenagers producing violent and dark plays in which people are tormented by their sins in all kinds of sadistic and sado-sexual ways. There is one, brief reference in Salvation Boulevard to this genre, when two characters, fleeing through the various sections of a mega-church mall, stumble upon the rehearsal space of as a group of teens who are practising torturing someone who has procured an abortion.
What I loved about the film (and I don't want to give too much of its plot away here) is the way it looks at the faithful and their reasons for belonging. The film's protaganist, the hapless reformed stoner Carl Vanderveer (played by Greg Kinnear with much smirking charm), admits on several occasions that he has stumbled into Christianity and has stayed more out of a sense of comfort and community than any great theological revelation. Instead it is his more aggressively testimonial wife (played brilliantly and quite unglamorously by Jennifer Connelly) who demands a public display of faith, all the while sailing close to hysteria.
It is interesting, too, in its effortless inclusion of technology into its plotline. This is one of the first movies I have seen in which mobile phones play an essential part in the plot. Indeed, they take on their own spiritual significance, with Pierce Brosnan's evil pastor being haunted by a vibrating red iPhone whose ominous "Unknown Caller" he inerprets as the modern face of Satan himself.
This is a funny and at times slight film, but it's well worth seeing if you have an interest in contemporary spirituality and the ways in which it is represented in contemporary culture.