After Walter asked me if I’d contribute a guest blog, I went in search of something wonderful to write about for him and found the amazing Arts of Pacific AsiaShow here in San Francisco! 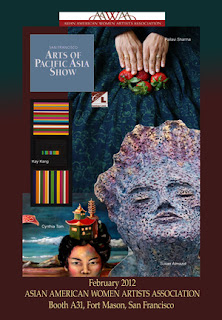 The annual San Francisco Arts of Pacific Asia Show is really spectacular, featuring exhibits from more than 75 art galleries from around the world and the San Francisco Bay area. I felt quite posh to be rubbing shoulders with the usual crowd of collectors and art aficionados. (The media rep for the show, Agnes Gomes-Koizumi, told me the shows have been attracting investors from around the world, especially China. At the organizers’ ceramics show, a Chinese collector shocked everyone when he pulled $430,000 cash out of his knapsack to make a purchase. “China is a new monetary market,” Agnes said with great understatement. Alas, I’m afraid people were much less impressed when I was only able to pull my little digital camera out of my handbag.) 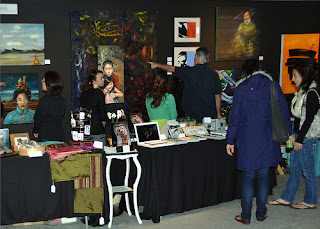 This year’s show was the first ever to feature contemporary Asian art as well as the usual displays of Asian antiquities. And while I like to look at centuries-old textiles, bronze Buddhas, Tibetan rugs, tomb figures, and all the other fascinating artifacts as much as the next person, I must admit it was the contemporary art that caught my eye.


First off it was impossible to miss the giant red, steel-and-fiberglass sculpture of a fortune cookie that loomed in the center of the hangar-like Fort Mason CenterPavilion. The shiny fortune cookie by artist Brian Zheng of Guangzhou, China, reminded me of the tricked-out Corvette you might find in the center of a fancy car show, and the $1,000,000 price tag suggested the recession isn’t hitting everyone equally! 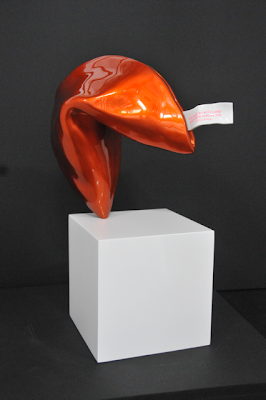 The contemporary art show was co-sponsored by the Asian American Women Artists Association (AAWAA), which is the oldest national organization in the U.S. dedicated to promoting the visibility of Asian American women artists.

“The organizers wanted us to bring in new people, a younger audience,”  AAWAA representative Khay Hembrador told me. “People are really surprised to see the political art. We’ve got the slave girl pillows out front!”
Indeed.

San Francisco-based artist Cynthia Tom’s “Chinese Slave Girl Pillows” were arresting and impossible to forget as they lay nestled together in a bamboo basket, the slave girl’s face peering out poignantly from within. 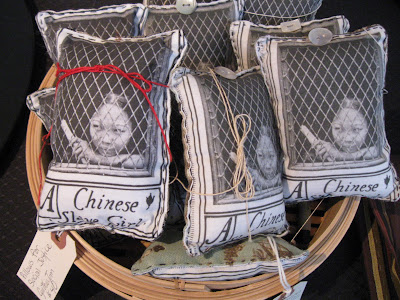 Cynthia told me she printed an early 20th century photograph of a Chinese girl working behind barred windows in San Francisco’s Chinatown on fabric, which she then hand-sewed into little pillows. “I want people to nurture the girl, pat her pillow, treasure her, take care of her,” Cynthia said, so that the slave girl’s spirit would be cared for in a way she never was in life.
Several of Cynthia’s acrylic paintings were also on display, including my favorite, the delightful and mysterious, “Cloud Walkers.” 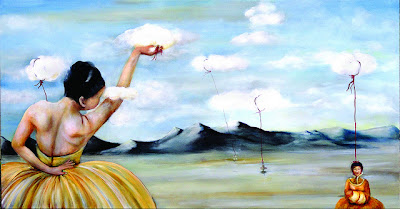 Shari was one of five artists invited to contribute designs—she created the watercolor/etchings for the Suit of Swords, which in this deck illustrates findings in physics and math. The cards are sold at the California Academy of Sciences, online (Amazon) and at various fairs in San Francisco, where they have delighted both the spiritual adventurers and Silicon Valley elements in the city. “The techies were so excited,” Shari said. “It combines both their interests!”


Shari is a trained architect whose refined artwork featuring etching, photo-etching, and watercolor is exhibited throughout the city. 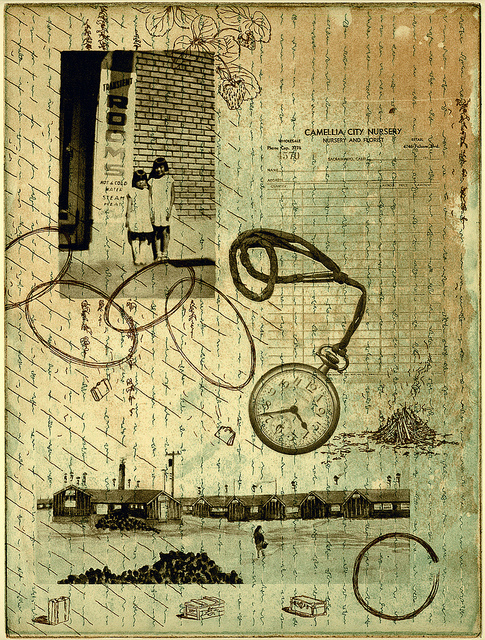 Artist Xiaojie Zheng’s paintings perhaps most personified the themes of the Arts of Pacific Show as she combines both traditional Asian art motifs with distinctively contemporary images. Xiaojie studied art formally in college in China before moving to Holland to study art on a scholarship. In 1999 she moved to the San Francisco Bay area where she has been working ever since.

In her acrylic painting, “Reconciliation,” Xiaojie portrays herself as modern-day Bodhisattva of Infinite Compassion, wearing a yoga tanktop as she perches on a lotus while clutching the many tools needed to complete the tasks in her daily life: a cell phone, rolling pin, paintbrush, shopping bag, photo of her children, etc. 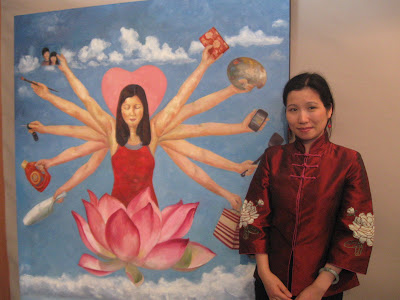 Readers who are interested in seeing more work by AAWAA artists can check out their website: www.aawaa.net.

The Arts of Pacific Asia Show has two annual shows, in San Francisco and in New York City. The public is welcome to attend. For future dates, check their website: http://www.caskeylees.com/SF_Asia/Info.html 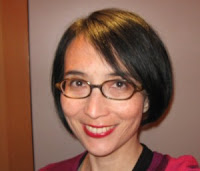 Guest blogger May-lee Chai is a writer based in San Francisco. Her books include the novel Dragon Chica, the nonfiction book China A to Z, and the family memoir The Girl from Purple Mountain. You can check out her blog at www.mayleechai.wordpress.com.
Email Post
Labels: Americans art asia Asian artists may-lee chai san francisco