January 7 is Victory From Genocide Day, a public holiday in Cambodia.
It commemorates the end of the Khmer Rouge regime which only lasted from 1975 - 1979, but which saw almost two million Cambodians die.
Here are some images from Cambodia which highlight some of the things people remember on this day. 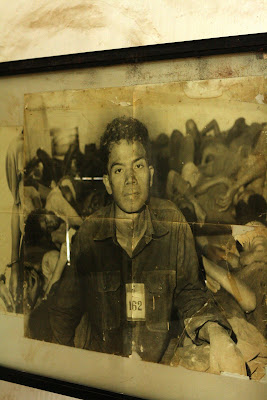 A photograph of one of the victims at the Tuol Sleng Prison. This was a suburban high school that was turned into a torture chamber for "enemies" of the Khmer Rouge regime. The Khmer Rouge were strangely particular about recording their atrocities, and carefully photographed all of the people they tortured and murdered. When you visit Tuol Sleng now you see the faces of all of those innocent people, knowing the horrible end they must have met. 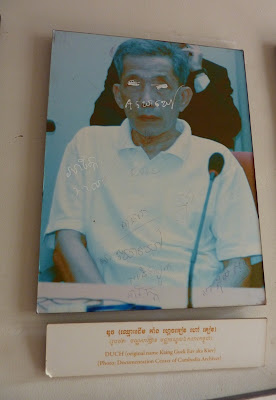 A vandalised photograph of Comrade Duch. Duch was the commander of the Tuol Sleng prison. He is still alive, and on trial for crimes against humanity. He has converted to Christianity. 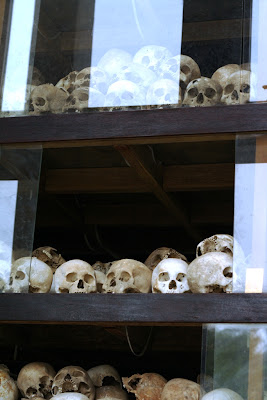 The stupa containing the remains of people buried at the Killing Fields. Thousands of nameless people had their bodies dumped at this mass grave. Their remains were collected and gathered together in this stupa, a traditional Buddhist monument for holding the remains of the dead.
Email Post
Labels: cambodia Cambodian history curating Cambodia Killing Fields