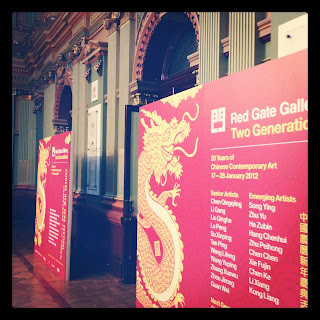 Australian art entrepreneur Brian Wallace is one of the great pioneers of modern art in Beijing, and he has brought a selection of his best artists over for a really extraordinary exhibition at the Sydney Town Hall, as part of the City of Sydney's Chinese New Year Celebrations. 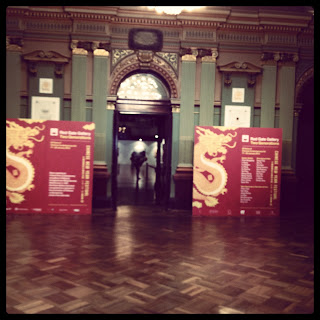 I visited it today in the cultured and stimulating company of Sydney crime novelist P. M. Newton, and spent an hour or two immersed in the works on display. 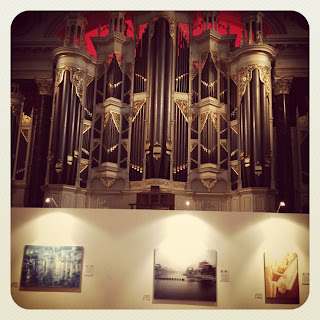 The premise of the exhibiton is quite novel - each of the gallery's senior artists (i.e. the Red Gate Gallery in Beijing) has nominated a favourite younger artist, and both are exhibited. This has resulted in a stunning and diverse selection, an almost chance-curatorship that is filled with surprises and the most wonderful new discoveries. 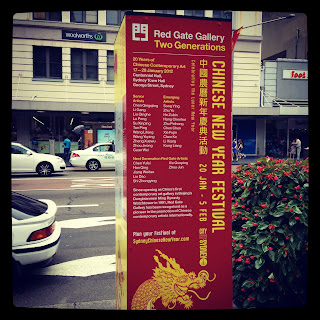 If you don't know much about contemporary Chinese art, then this is an exhibition you need to see. It is utterly fascinating in its depiction of Chinese soicety as well, and each piece could make up a little part of a collage of modern Chinese history. 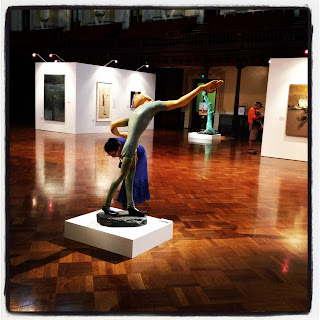 The exhibition space itself is, of course, just wonderful, and worth the visit alone. The high camp of the Sydney Town Hall matches some of the campier and more whimsical pieces, blended in with other more serious or challenging pieces embracing a broad range of styles and media. 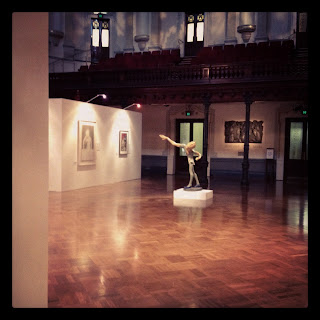 Do get along. There is also a programme of on-site artist talks, and also resident artists, so if you time it right you could be in for a fascinating afternoon.
And do note, it is an afternoon - the Centennial Hall at the Sydney Town Hall (straight up the stairs and inside) doesn't open till 12 midday.
Highlights? I was captivated by the cryptic Buddhist imagery of video artist Zhu Yu, as a plump, bare-breasted woman demonstrated the intricate mudras of Buddhist iconography against the soundscape of a mundane English-conversation learning CD ("You look fantastic today!"). I was also drawn to Han Qing's exquisitely rendered Nightscape, a piece which borders constantly on abstraction, and yet which makes up an entirely recognisable world each time you look more deeply into it. The impossibly handsome Han Qing was actually the artist in residence today, and was seated shyly all alone at a table by himself, but I was too shy myself to approach him. Pity, really, because I am sure he would have had something fascinating to say.