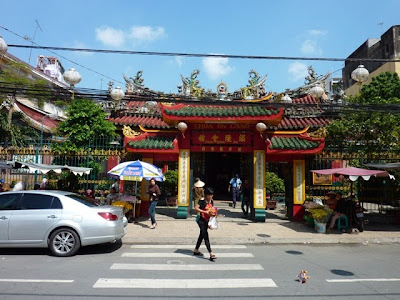 One of my favourite places to hang out at in Saigon is the Kwan Yin Temple in Cholon.
It is filled with the most mysterious statues, many of them belonging to the realm of Chinese popular religion and requiring a great degree of localised knowledge in order to be recognised. 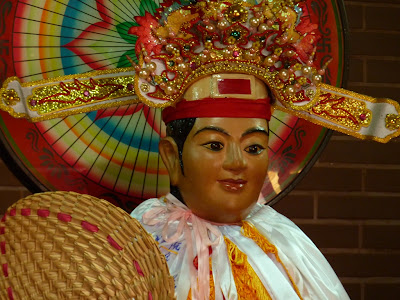 I have made good friends with some of the people who work here, over the years, and even they are unable to identify some of the statues with any certainty. They are more likely to identify them according to the attributes they exemplify for the worshipper, and for the particular purpose of their worship. Certainly many of the people visiting the temple have only the vaguest grasp of who most of the figures are, apart from the obvious ones, like Kwan Yin, the Buddhist Goddess of Mercy, to whom the temple is dedicated.
The walls are embossed with 3D friezes (not sure I'm describing these properly) which have been rendered in plaster and cement, representing Buddhist deities and characters from Taoist and other popular religious stories. 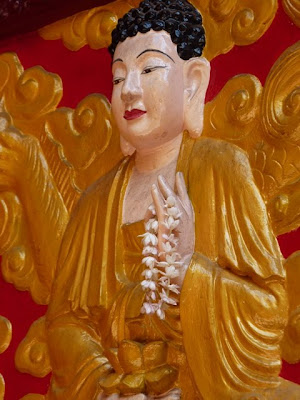 These are becoming my favourite features of the temple - there's something charming about the naivety of the figures, and the almost-spooky way they reach out from the walls. Worshippers drape small garlands of honeysuckle and jasmine over their outstretched hands.
And I am in love with the odd-looking child-attendants of Kwan Yin in the main shrine. 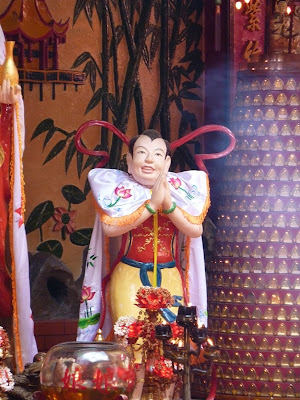 They have adult heads on small bodies and are deliriously happy, though quite what for I have no idea.