Jennifer Wong on Comedy and Reading

I asked writer and comedian Jennifer Wong about books, comedy and inspiration - here's what she said:

1. Are all bookish people secretly harbouring a desire to be in the spotlight?
What a great question. I like the idea of secret harbouring. That it’s desire is just a bonus.
I think bookish people are usually logical people, who’d naturally shun the spotlight knowing that it eats in to your reading time. But then bookish people are also by nature pretty curious (although it may be entirely possible to be bookish only for econometrics textbooks, or bookish only for technical writing handbooks), so maybe within that curiosity lies a deep need to experience being onstage with all eyes on you, at the absolute centre of attention with no competition, just you and a microphone, a bare stage and the incredible and addictive power and privilege of telling jokes and stories to total strangers, all the while aware that the risk of failure is just a misplaced word or two away. Of course, this is all just speculation.
I’m not sure if I secretly harboured a desire to be in the spotlight, but when I was little I 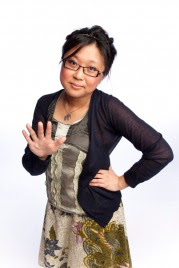