I discovered this song on Sunday while watching SBS Pop Asia.
My Sunday mornings have now become sacred because I know that between 8.30 & 10.30 am I can watch the most glorious pop from all over Asia. For too long fans of Asian pop have been forced onto Youtube to suffer forced K Mart ads and tiny screens of their idols.
What a revelation BEAST were on the big screen! Let's admit it now - no-one does boy bands better than the Koreans. It's the dancing, the clothes, the blonde hair, the bizarre ear ornaments. I don't know about you, but I just can't get enough. 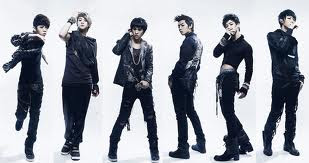 In the inimitable fashion of Korean boy bands, BEAST is actually an acronym for Boys of East Standing Tall. So now you know.
So feast on BEAST, and don't forget to get up early on Sunday to see SBS Pop Asia on SBS1.