Unless you go to church regularly (and I doubt that very much) you are probably unaware that in the Christian world there are two subjects that tear religious communities apart. The first is homosexuality, and you are probably pretty much au fait with its controversies. The second is hymns. And I would say that it is probably the latter issue that gets people angriest. So emotive are these two issues that at one stage the Uniting Church magazine placed an embargo on discussion of either topic on its pages.
What's so divisive about hymns, I hear you ask? Well, up until the mid-70s people in churches across the country sang pretty much the same hymns, most of them at least a century old, many older. These were the songs that people grew up with, the songs they were married to and buried with, and their tunes and lyrics became a part of Western popular culture. New standards were gathered along the way, but at a stately pace. One very rarely heard a "new" hymn sung at any church, no matter what the denomination. Hymns were sung to the accompaniment of an organ (in my case frequently being played by a relative), were filled with "thees," "thous" and "thines" and contained ample doses of fire and brimstone and evocation of Christ as king and humans as miserable sinners - just think of the line in Amazing Grace about saving "a wretch like me."
In Protestant churches in Australia the main hymn book used was Alexander's red Hymns, and I recently came into possession of a copy from the early 1960s that had belonged to my great grandmother. 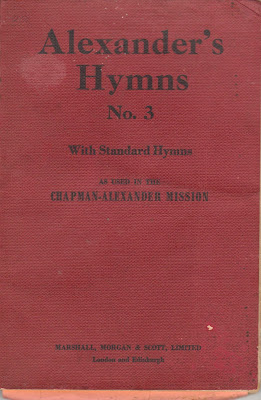 Just seeing the distinctive red cover made me nostalgic, and the book automatically fell open at Hymn No. 252, Abide With Me - obviously a great favourite. 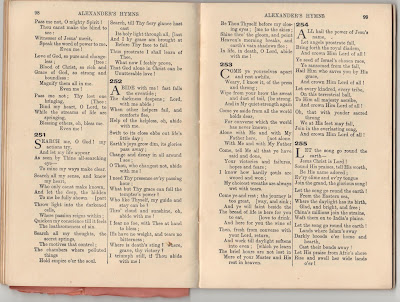 I also gloried in the index at the back, containing the first line of the hymns - a universal way of recognising and naming hymns in those days. Special favourites had been marked by her with a pen. 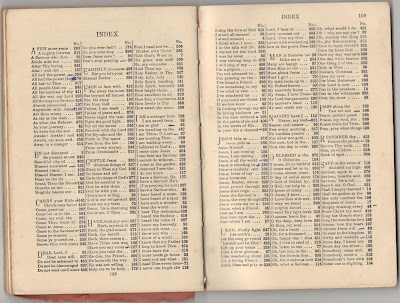 But fashions change, and Christian denominations across the board began to get with the times around the middle of the 1970s. Organs were torn out from churches and were replaced with acoustic guitars, recorders and pastors playing the bongo drums. The old hymns were largely abandoned and replaced with 70s soft-rock that soon became instantly recognisable as a special genre all of its own. The tradition continues today at mega-churches like Hillsong. Occasionally the old tunes were kept but replaced with gender-inclusive and more uplifting language. The "Wretch like me" became the "Soul like me."
Christians of a progressive stripe become quite furious now whenever they hear an old hymn sung, decrying the chauvinistic language and the bad theology. I once witnessed a woman cry at a progressive conference because we'd sung Jerusalem.
But deep in the hearts of many an old Methodist lurks a secret passion for the old hymns, and I have heard of secret progressive parties where people sit around an organ with a copy of Alexander's singing the old tunes in a spirit, supposedly of irony, but I suspect of true nostalgia and affection.
Email Post
Labels: 1970s books christianity hymns nostalgia

chris said…
I grew up in South Africa and we had two Alexander's at home. They saw frequent use, and 50-years down the line I still remember those old hymns fondly. There was a grandeur to them. Thanks for the blog!
23 October 2012 at 23:01

Anonymous said…
I agree with your more general comments about hymns but at least in the mainstream Protestant denominations (Anglican, Methodist & Prebyterian till the Uniting Church) their official church hymnals were the main sources of hymns sung in church (though a few of Alexander's hymns were included in the official hymn books, and were popular till the 1970s, as you say.)

My grandmother, who was born in the 19th century, used to always have the red Alexander's book close by her piano at home for personal use, along with church hymnals.
18 November 2012 at 23:54

Traditionalist said…
As an old traditionalist, i yearn to be able to sing the old hymns...i cannot find a church that still sings these soul stirring pieces and i feel like it's a precious part of my christian walk that is missing!!!
25 May 2016 at 14:24