Today I am thrilled to post a guest blog from photographer Evan Cooper explaining his wonderful Commitment Project. It is so important to celebrate and promote the strength and diversity of all the forces of love at work in our world, and Evan is doing something incredibly important and powerful. 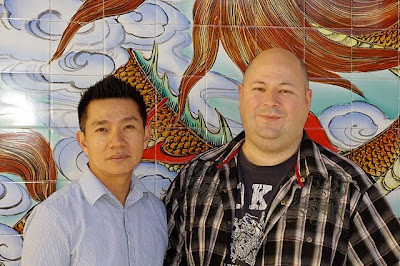 As 2009 drew towards the Christmas season I decided I was FINALLY going to get myself a digital SLR camera. As a hobby photographer most people would think this would be quite a standard purchase, but you haven’t actually seen the size of my camera collection. People often look at my shelves and ask “why so many cameras?” And the only reason I can actually give them is “I like cameras”. You see I have …. Lets just say a lot of cameras and I’ll admit I don’t get to use them as much as I would like to.

So to stop all my friends and family excessively eye rolling at me when I announced “Hey I bought a new camera” I decided I would take on a project that would justify the reason for the purchase. But what would the project be? I could, like nearly every other gay male photographer decide to focus on beautiful male nudes and dream of being the next Bruce Weber. Hey I’m not knocking guys that do this and I have seriously considered this theme myself, and while I do not lack in self confidence in most areas, I would splutter, stutter and stammer if I had to approach some insanely attractive guy and ask him to pose sans clothes.

So the theme I picked was to document long-term gay and lesbian relationships. Why did I choose this theme? Well there were a number of reasons:

1. “Gay” marriage has been getting lots of press for the last few years and I wanted to help contribute to bring around equality.
2. I had previously made low budget documentary films and had written an idea to make a film about the subject
3. After watching both my grandmothers lose their husbands I got to see that they truly and deeply were IN love until that last day.

Yes watching my grandmothers broken hearted was an extremely hard thing to witness, but trying to see the experience in a glass-half-full manner I got to witness some truly beautiful romantic events: the tender stroking of hair during conversations, a hand being held while the other napped, intimacy that you don’t generally get to see from your grandparents.

I always wonder if I, as a gay man, could ever think this was even remotely possible for me or my friends, or were we destined to live a life of short relationships?

So I decided to search and find out if there were gay and lesbian couples out there that could be labelled truly “long term”. First I needed to find a number I would class as long term. I turned to the Australian Bureau of Statistics trying to find a number that they recorded. I found a stat for the median length of an Australian marriage. (Some people think median is the average, and while it can sometimes be it isn’t exactly. I doubt I can explain it eloquently here so I suggest you look up the definition for yourself.) So the first time I look on the ABS site it stated that the median length of an Australian marriage till separation was 8.9 years. I decided this was the minimum length of time a couple could be together to be included in my project.

Now interestingly the length of time has changed. After a pretty messy break up (of a way too intense relationship) I took a break from the project. I didn’t want to be surrounding myself with all these loving happy couples with my own heart broken. But soon I picked myself up, thought “man up and get on with it.” I thought I had better re-check my facts, and when I looked at the ABS site the length had dropped to 8.8 years. Recently I had to write a similar article like this and the time had reduced again to 8.7 years.

Lots of people have asked me how I define a committed relationship for this project. And the answer is, I don’t - the couples do. Some of the couples have had commitment ceremonies, some have had a British civil union, others have travelled overseas so they can actually be married (but not in the eyes of the Australian government). Most live together, but interestingly the longest couple both have separate homes and while they spend most of their time together don’t officially live together.

What have I learnt about relationships from meeting over 40 couples? Well lots and also not much. Many of them will tell me the secret to THEIR relationship, but it is only the secret for them. While one couple say that they have exactly the same tastes in everything, others say they couldn’t be more different. The only consistent thing through every couple is that they love each other. That is the secret: finding the person that you love and that loves you back.

How you find that person is anybody’s guess. While in this day and age a number of the couples have met via the internet (and are not in any way embarrassed to admit that) others met on the first day of university, some set up by friends and one couple met by literally bumping into each other as they boarded a plane.

Do you want to know the thing I have loved the most about doing this project? It is that I have met such a diverse group of people. If you look at the photos I have collected you CAN’T say that only one type of people find their soul mates. The ages of all involved are vastly different, their cultural backgrounds are different, the age gaps between the couples is different. I’m sure if you asked a group of heterosexual couples to come forward and have their picture taken for the same reason the diversity would be the same.

Diane Arbus was mentored by a great photographer called Lisette Model. Lisette had a saying “the more precise you are the more general you become.” Ok yeah, I don’t really get what she means BUT I think that my project is actually the opposite: by showing how diverse these relationships are, the more precise is the point that no matter who we are, we all pretty much just want the same thing – to love, be loved and have that loved respected by the world around us.

Walter and his partner Thang are featured in the photo collection. Now I can’t say I have a favourite photo, as I don’t (every time I look at any of the couples my heart flutters just a little) but what I can say that after I downloaded the photos we took and looked at the photo (which they ending up choosing) I got this sense that yes I can actually make this project something worthwhile, I got that rush of reassurance that this is something I can be proud of.

And yes I am proud of the project but really I’m inspired by the couples. Inspired to believe that one day I will be able to add myself to this collection of photos. Inspired that these couples’ images will help reduce homophobia in anyone who looks at them. Inspired that one day because of the example set by these amazing people that one day we will have marriage equality in Australia. Hopefully you will be inspired by the photos to believe that really no matter what the differences between the gay and straight worlds that Love is Love.

So please enjoy looking at this collection of images and if you would like to be part of the project, my contact details are on the site.

And PS - meeting all these couples actually helped me mend my broken heart and to be the silly, cynical romantic I used to be.