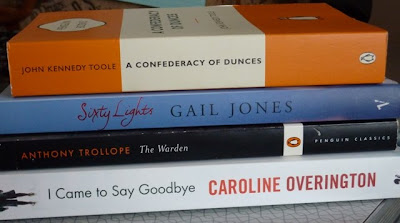 I am immersed in one of John Burdett's wonderfully politically incorrect Bangkok-based murder-mysteries at the moment, but as soon as I'm finished I'll be headed to mildly more serious waters. Here are the month's novels, from the top:


John Kennedy Toole A Confederacy of Dunces - This is actually one of my favourite books, and I have read it several times, but my old 1990s edition got dropped in the bathtub or left out in the rain, so I had to toss it and buy this nice (and cheap) Penguin Classics edition. An excuse to read it once more.

Gail Jones Sixty Lights - Gail is one of the leading lights at the Writing & Society Research Group at the University of Western Sydney, where I am completing my PhD this year. I see Gail regularly at university, but shamefully have yet to read one of her books. When I saw this one in a shop I grabbed it. I think I will read this one before her brand new release Five Bells.

Anthony Trollope The Warden - You may remember a couple of months ago I was ecstatically watching the Barchester Chronicles on DVD, and this is one of the novels that made up the series.

Caroline Overington I Came to Say Goodbye - Someone I trust on Twitter mentioned that this was a terrific novel, and then a dear friend had to review it and he said it was the best Australian novel he'd read in years, so I have been meaning to get it ever since. It's rare to hear that kind of recommendation twice in a row.
Email Post
Labels: Bangkok fiction John Burdett new books novels